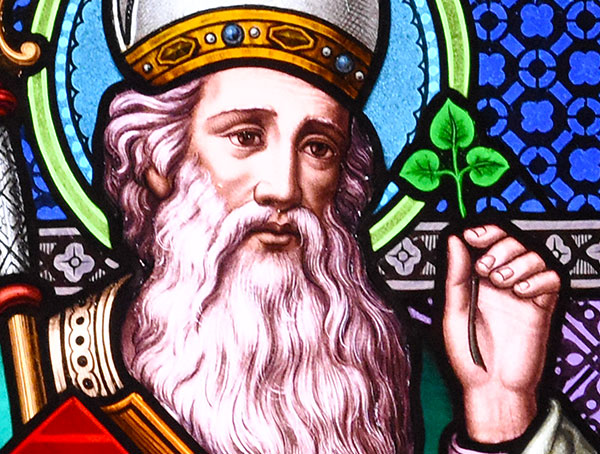 St. Patrick, the patron saint of Ireland, has come home to Moretown in time for Saint Patrick’s Day this year.

St. Patrick, in the form of a beautiful stained-glass window depicting the Irish saint holding a shamrock, was part of St. Patrick Catholic Church in Moretown Village when that church was built in 1882, but there’s some question about whether St. Patrick was created for the village church or for an earlier St. Patrick that was built in 1857 at the bottom of South Hill Road.

South Hill Road, or Paddy Hill as it was often referred to, was the home of many Irish immigrants to Moretown and Vermont in the middle of the 19th century.  The cemetery that was part of that church still stands and the foundation of the former church is still visible as are the original steps to the church.

How the stained-glass donation of the Irish icon came to the village church as well as more than a dozen elaborate stained-glass windows remains a bit of a mystery as does the fate of the church on South Hill Road.

Legends and historical reports vary and the truth may never be known because of a fire that occurred at the Catholic Diocese office in Burlington.  Some reports noted that the former church was moved from South Hill Road to the village. Other reports say that the original church burned down and still other reports have it that parts of the church were moved to the village.

The village church features the arched stained-glass window of St. Patrick high above the altar in the sanctuary, donated by one of Moretown’s original Catholic families. The name that can be seen on the glass reads “Gift of H. McGurk” in an old-fashioned script that makes it hard to be sure.

All of the ornate stained-glass panels in the church have inscriptions detailing the families who gifted them. Easily legible names include Ben and Mrs. Lefe’vre; Mary Cashman (grandmother of Irene Flanagan Smith of Waitsfield), Wlm and Ellen Wornbrook, Thomas Foley, Thom McCarthy and a McCarty family.

“These are priceless pieces that have incredibly historical value for our community,” said Father Jerry Mercure, priest at the church and at Our Lady of the Snows in Waitsfield.

Mercure said that St. Patrick came home to Moretown last fall, from Founders Hall in Waitsfield, part of Our Lady of the Snows.

When Our Lady of the Snows was built in the 1960s, that church and St. Patrick became one parish, Mercure said.

To seal that relationship, the stained-glass panel of St. Patrick was removed from the Moretown church and installed at Founders Hall as a unifying gesture, Mercure said.

“I brought to the church and pastoral council the idea that St. Patrick was historically part of the Moretown church and that it was important to bring it back to where it was originally,” he said. That decision was prompted by discussions between the diocese and Waitsfield Children’s Center about selling Founders Hall to the preschool.

“People were quite happy about the change. We had stained-glass expert Steven Kemp remove it from Founders Hall, which wasn’t easy. It had been put there to stay. He stored it while he worked to figure out what the original enclosure at St. Patrick had looked like. It had been covered up and built over. He had to reconstruct and seal the enclosure,” Mercure said.

This year, in honor of St. Patrick coming home to Moretown, St. Patrick Catholic Church will hold a celebration and rededication on the feast day that follows St. Patrick’s Day on March 18.

(See related story about the history of Irish settlement in Moretown and The Valley on Page 7 of March 15 issue of The Valley Reporter.)