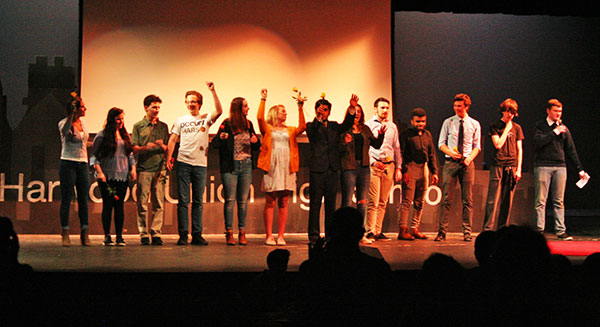 Eleven Harwood Union students took the stage at the school’s auditorium, one at a time, to share their TedX talks before an enthusiastic audience on April 28.

The TedX talk was the only such talk to be held in Vermont this year. Organized by Harwood educator Alex Rawson with the help of Matt Henchen, Jonah Ibson and Sam Krotinger, the event demonstrated the depth and breadth of students’ interests, passions and challenges.

Emceed by Connor McCarty – who took the stage with confidence and humor and compassion – the event was opened by Camille King advocating for changing the voting age from 18 to 16. She compared other rights that 16-year-olds have – including the right to drive, get a passport, pay taxes, be an organ donor and own guns – to the responsibility of voting, arguing that stereotypes about America’s youth are not healthy.

“We’re not children; we’re young adults who pay taxes into the system. We should be allowed to have a say in the system,” she said.

Elias Skjoldborg followed with his talk titled “Nihilistic Optimism” in which he explained the concept of nihilism as life having no apparent meaning. Given that, he asked, “What’s the point? Why live?”

“Why am I here? I figured out that I want to be happy. If life has no meaning, there’s no need to be sad,” he said.

His optimism, he said, comes from what he called a teenager’s recipe for life, which includes getting a hobby, helping others, attitude and being aware.

“We can choose to do what we want with our existences, so why waste it?” he asked.

Lilly Dolloff took the stage next with her presentation “Ending the Pursuit of Perfection.” The middle-schooler began confidently, citing statistics about how women and girls are portrayed in modern media and how they are expected to look. She offered statistics about the numbers of women, girls and people with body image issues and eating disorders. When she began to segue to the personal, her own experience with an eating disorder, she faltered, paused, drank water, paused. Unable to continue, she walked off the stage to applause that was rivaled only by the applause when she returned an hour later ready to give her talk from start to finish.

Upon her return, she was able to discuss her personal issues with an eating disorder and did so with clarity and compassion. She talked about being in a changing room in a shop in a mall with family and friends and being embarrassed that the dress she was trying on was too small.

“Humans come in all shapes and sizes. That’s why it doesn’t matter if that dress doesn’t fit. Self-destruction comes from that and that can lead to an eating disorder like it did for me,” she said.

She urged people to make a list of what they like about themselves and to use that list to build themselves up rather than tear themselves down.

She left the stage to thunderous applause and a standing ovation followed by emcee McCarty praising her talk, patting his stomach and concurring that humans come in all shapes and sizes.

“Look at me. I’m still warm from winter!” he said.

Seth Davidson took the stage for his talk, “The Ideal Form of Government,” noting that his generation was coming of age in a toxic political climate. He outlined two differing theories of governance with the government providing for its citizens (including a strong regulatory climate) versus the freedom arguments as advanced by Locke, Rousseau, Hobbes and Smith.

“I don’t have a solution to our woes. I believe in liberty and personal sovereignty,” he said.

Levi Gallon’s talk about Aid and Africa followed in which he discussed how social and media representations of Africa colored his perceptions of Africa before he was able to visit Kenya.

“I thought of tribal dances, war, famine. I never thought about what it was like to be an African,” he said, until he visited. “I saw people living their lives like we live ours,” he said.

Artwork as a learning snapshot was Ashleigh Turner’s topic in which she discussed past and current models for how people learn and urged society and educators to place a great priority on how art can be used in the classroom.

Project-based learning, incorporating art, is a great way to bring art in the classroom, she said.

“We all do better when we actively engage in a project,” she said.

Bullying in schools was Acme Wasi’s topic and he delivered it in a suit. One in three students is bullied at school, he said, before breaking out the dynamics of bullying, the hows and the repercussions. He cited national and international initiatives aimed at stopping bullying and teaching compassion.

“I don’t think kids are born to be bullies,” Wasi pointed out.

Tyler Skroski followed with his talk on “Art and Mental Health.” A natural storyteller, Skroski explained that his passion for art became his therapy following the car crash that claimed the lives of five of his peers in October 2016.

“After that event, I tried many different forms of therapy, none of which worked as well as art. On the first day back at school I asked my art teacher if I could draw portraits of my friends, for their families,” he said as sobs were heard in the auditorium.

That effort, he said, as his drawings of his five lost friends appeared on the screen behind him, helped him deal with his emotions.

“After that I could deal with my emotions,” Skroski concluded.

Colin Kendrick was up next with a piquant and humorous talk on “Math Queries and Quandaries.” Using the rock, scissors, paper game he covered probability, logic and statistics, delving into a mini-golf course where kids can play for half price.

“Fractions don’t help with some logic,” he pointed out.

“The world is too complicated to explain with numbers and symbols,” he added.

Abigail Burr took the stage for her talk “Misunderstanding Depression.” She opened by noting how relatives who haven’t seen her recently always note that she looks so healthy, like a model of health.

“But I’m depressed,” she said, explaining that she had been diagnosed with a major depressive disorder and has days when she can’t get out of bed. She takes an antidepressant every night and sees a therapist every week. Her teachers are notified if she gets a new medication, but still, she said, she sometimes gets the sense that she’s being judged for lack of willpower.

“It’s not about willpower. It’s a question of neurochemicals,” Burr said.

She offered some advice for helping others understand what depression is like. She said people should educate themselves, remind those with depression that they are strong, make people laugh. And listen.

“The right thing to say is that their depression is real and they’re strong enough to make it through,” she said.

The final speaker was Abbey Dooley who spoke on “The Blessing of Dyslexia” and said that she realized in fourth grade how much harder she had to work than her peers. But now, she said, she realizes it was a blessing because of what it taught her and because it opened her eyes to the passion that she has to help children.

“As a child, I always thought having dyslexia was a bad thing. I realize now, it gave me a gift,” she said, explaining that she was thankful for the teachers who put in hours of their personal time to help her.

Dyslexia is a roller coaster, she said, and one that points out how important it is for people to “own your challenges and embrace your differences. Persevere,” she concluded.