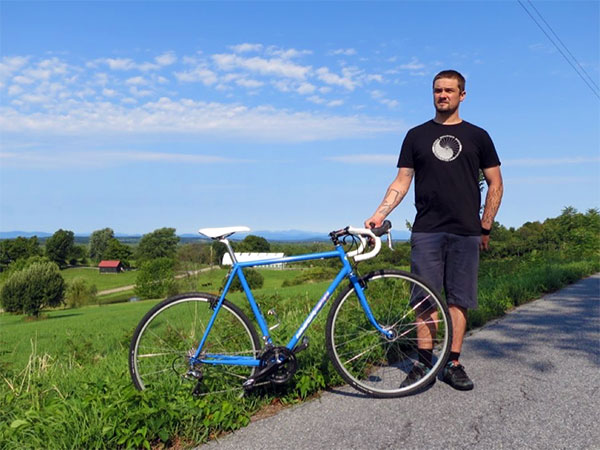 Zak Hinderyckx wants to build bikes that are comfortable and that make people happy.

Hinderyckx lives in Port Townsend, Washington, now, but he grew up in Rochester, Vermont, hanging out in his father’s bike shop and he still comes back every summer to use his bikes on the trails in the area and sell them at his father’s shop, Green Mountain Bikes.

“I just come back in the summer to build bikes and work on bikes and spend time with my dad and be in Vermont during a nice time in the year,” Hinderyckx said.

During high school Hinderyckx moved to Washington and after high school he began an apprenticeship with a sculptor, where he stayed for 13 years until 2012.

During his apprenticeship he became interested in metallurgy and one day, when he was back in Vermont at his father’s Rochester bike shop, he thought that he would be able to build his own bike.

“I just thought, I mean I was staring at bikes my whole life. I thought, hey, I can make one of those,” he said.

Hinderyckx said he began his learning process by teaching himself how to construct bikes and weld metal by taking on a lot of projects and learning from others.

“Everything I know about metallurgy comes from working with people who know more than me,” he said.

Most of the bikes he builds are steel, though he has been learning more about titanium recently.

Hinderyckx says it takes him approximately 40 to 60 hours to finish a bike.

Hinderyckx said that the goal of building custom bikes for him is to ensure that the end user enjoys riding it.

“My approach to bicycles and bicycle culture is pretty much the same as my dad’s. … He’s one of the happiest, most unassuming people. There is so much good to come from riding bikes. So my goal in building bikes is to make people happy riding bikes,” Hinderyckx said.

He said that when a bike fits you well it can be the most liberating feeling.

Hinderyckx’s primary job nowadays is exotic metal repair. He works on many boats because Port Townsend has a large maritime industry; he has also worked with distilleries to fix their distillers. However, he would like to make building Hinderyckx Bikes his primary occupation.

Hinderyckx makes a point to come back to Vermont each summer for myriad reasons, to be with his dad, to work at Green Mountain Bikes and to get to enjoy the Vermont mountain biking scene.

Hinderyckx said that the trails may change slightly, but it is still the same mountains and the same style of riding.

“I love Vermont. I grew up riding bikes all summer and snowboarding at Sugarbush in the winter. When I’m back there it’s like coming home, the trails be faster and the shop gets fancier, but it’s still a beautiful little place that I love to be,” Hinderyckx said.