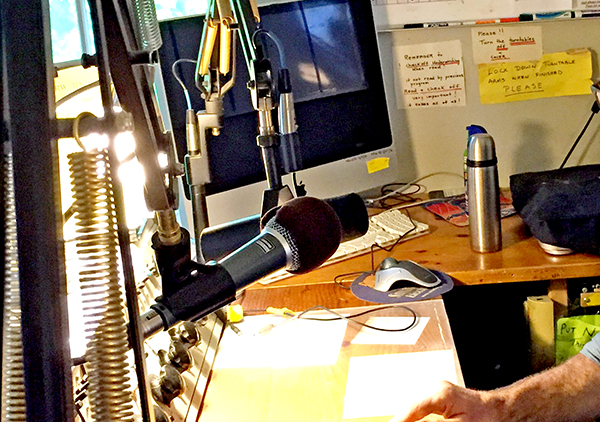 Every week Valley residents and visitors tune in to WMRW 94.5 FM Warren to listen to friends’ and neighbors’ shows. The WMRW radio station was founded in 2004 and is located upstairs at the East Warren Community Market. This week, The Valley Reporter offers the third story in a series featuring some of the DJs and programmers who volunteer their time each week.

The shows and DJs are varied as their music and content. Tune in next week for more DJ and programmer profiles.

Expand that musical repertoire with Dan Eckstein, whose show, “Green Mountain Global-Local,” has been airing for the past 13 ½ years. Eckstein said he was initially drawn to radio because of his “long lifetime interest in music.” In college, he participated in the college radio station for a couple years. He wanted a rock ’n’ roll show, but “the list for getting a show was long and there was a waiting list,” so he instead decided to “go with the jazz department, which was great.”

“I love turning people onto music and giving them an opportunity to let them hear something they wouldn’t hear,” Eckstein said. So when he heard about a local station starting up here in the Mad River Valley, it was only natural for him to begin a radio show.

He described his show as “eclectic to a degree” with his “mission, to play stuff that doesn’t get played on the radio normally. … With that as my guiding principle, I definitely lean to music from other countries,” he said. He said he also “tries to play local musicians who are also deserving of some airtime.”

Eckstein said, “I grew up in a house that my parents were into eclectic sounds and one of the things my dad really loved Latin music.” This “many years of having it playing in the house” with foreign music served as the initial impetus for his love of global music, and eventually “other things started finding their way onto [his] stereo.”

Running a show is difficult: “We lead busy lives work and a family and your weekly show comes up,” Eckstein says. Once he gets in the door, though, “There’s no distractions; they basically get put on hold and you get into the music and people are listening and hopefully getting into it.” That time in the studio, “away from all distractions in life and being with the mystic,” is incredibly cathartic, he said.

Find Eckstein and his on WMRW from 9 to 11 p.m. on Monday nights.

A Show of Sound

Every Monday from 5 to 6 p.m. Ruth Ann Pattee brings theater to life through the radio.

She described her shows as varied, but “Generally I pick a topic or a scene; we play music and talk about the shows a little.” Initially, she “did a lot of interviews of local actors,” but, after a hiatus, Pattee returned to the radio and she said, “This time around I’m much more enjoying creating scenes.”

She described her interest in radio as an artistic endeavor: “Such a unique medium and I feel like there’s very little opportunity to take part in that and it seemed like such a cool thing to learn.” She also seized the “opportunity to talk with people and play theater music.”

Much like professional radio stations, Pattee maintains a Facebook page to “encourage people outside The Valley to listen to it online.” She also encourages audience engagement whether through comments or even, as happened this past week, she got a live phone call. She also refers to her Facebook page throughout the show to promote the dialogue.

Drawing on the “strong amateur theater presence in Vermont” and her experience as “an actor, producer, and director for about 30 years as well as the children’s theater director for KidsACT for the past 20 years,” she adds a wealth of knowledge to the shows discussed. She also enjoys “researching the shows and coming up with little unknown anecdotes about them,” so inevitably something new will be heard.

Find Pattee on WMRW 94.5 on her show “Theater Backstage.”