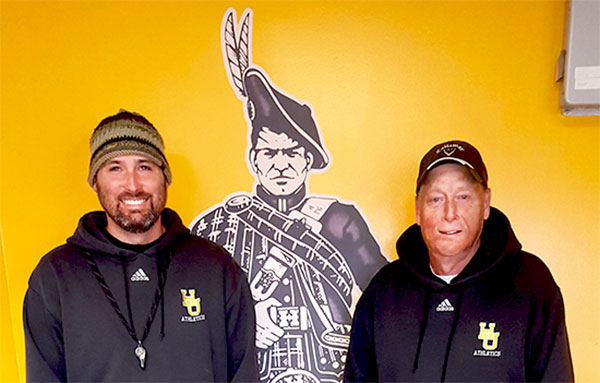 After 19 years of filling the head coach position for the Harwood boys’ hockey program, Dave Morse is hanging up the laces. Shaun Morse, Dave’s son, who has also been his right-hand man and co-head coaching accomplice for the last 15 years, is set to take on the sole role of head coach.

Morse is packing away the hockey bag after racking up 243 wins, 149 losses, 20 ties and four state championship appearances. The Harwood Highlanders were able to clinch a championship victory at UVM where they won the title in 2005.

“Dave Morse is the best coach I’ve ever had in any sport. His coaching abilities are a rarity, to have a coach that pushes you to achieve your goals. I left the program knowing that nothing is given to you; coach Morse makes you earn everything,” said Highlander alum Chris Martin, who played for Morse from 2004 to 2008.

“Dave was the best fundamental coach I’ve ever had. I’ve played all over New England with countless coaches, but Dave always took the time to still go back and remind you of the basics,” said Ty Delphia, a member of Morse’s team and alum from the 2010 to 2014 seasons. “Playing for Dave was a real goal as a kid growing up watching the varsity games. He had experience and great knowledge on and off the ice,” Delphia said.

Dave Morse leaves a legacy behind him that many student athletes, parents, fellow coaches and community members appreciate.

“Not only could he read the game, he could read his players. He had a knack for knowing what made his players tick and would say the right things at the right time to bring the best out in players. Dave Morse will forever be synonymous with Harwood hockey,” said Jacob Grout, another player from Morse’s team from the 2004 to 2008 seasons.

“I coached because I love the game of hockey. I wanted my players to ‘Love the game beyond the prize,’ which was the original slogan of Harwood Youth Hockey. I have met so many great young men and women during my career. I will miss the experience of seeing a young athlete's ‘aha moment’ when they figure out what playing varsity hockey is all about and how they fit in. Thank you to all the players who allowed me to be part of their high school hockey moments,” Dave Morse said in a press release from Harwood athletic director Chris Langevin.