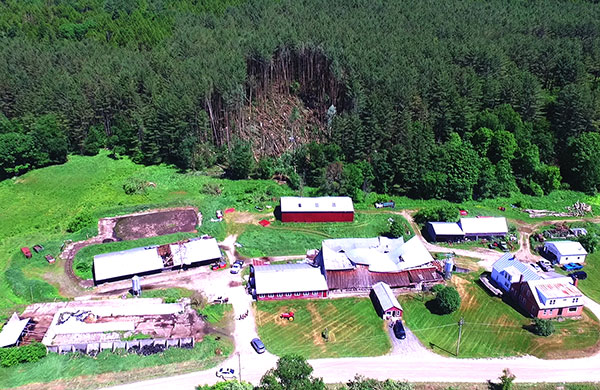 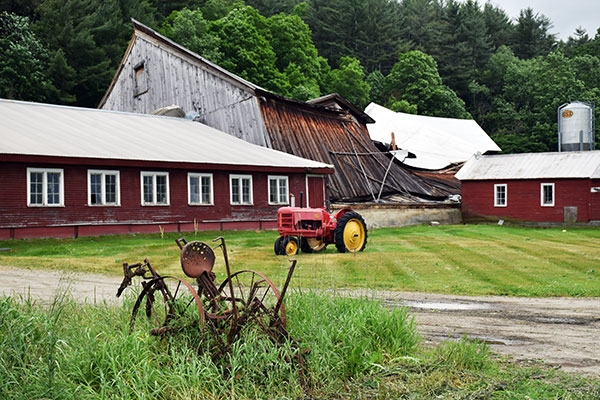 “It’s like losing a member of the family,” said Waitsfield farmer Elwin Neill after a fast-moving, intense rain and wind storm swept through The Valley on June 18 from northwest to southeast, leaving behind a swath of destruction that destroyed the historical dairy barn at his farm on Meadow Road and damaged two other properties in its path.

After meeting with insurance adjusters after the storm, Neill said that while he was insured, he won’t rebuild the historic barn that was 150 to 175 years old.

“I have no reason to rebuild it. I don’t need a 110- by 45-foot post and beam, three-story barn with 4,500 square feet per floor,” said Neill, who transitioned from dairy farming to meat farming about a decade ago.

He anticipates selling the barn timbers to a salvage company or selling them himself so that they don’t rot on the ground.

The storm hit The Valley around 4:30 p.m. and wreaked havoc on an area about 200 to 300 feet wide and 1.5 miles long, according to Fred Messer, Waitsfield’s emergency management coordinator. The storm first damaged a home on Quarry Road where trees were dropped on a portion of a house and vehicle. From there the storm hit Owen Wimble’s house which is north of Hartshorn Road.

The storm, which the National Weather Service’s (NWS) has labeled a wet microburst of wind and rain in its preliminary review, crossed Route 100, the river and farm fields traveling southeast where it hit the roof of the Neill dairy barn, collapsing it on its side and then hit and blew out the back of the farm’s free-stall barn before exiting the property by climbing up the ridge behind it and destroying an enormous stand of mature pine trees.

There was a cow and heifer in the free-stall barn as well as barn cats in the big barn.

No humans or animals were hurt at any of the sites that were hit by the blast.

Neill was not home when the storm hit, he was at Kenyon’s when Messer’s wife, Carla,  called him. 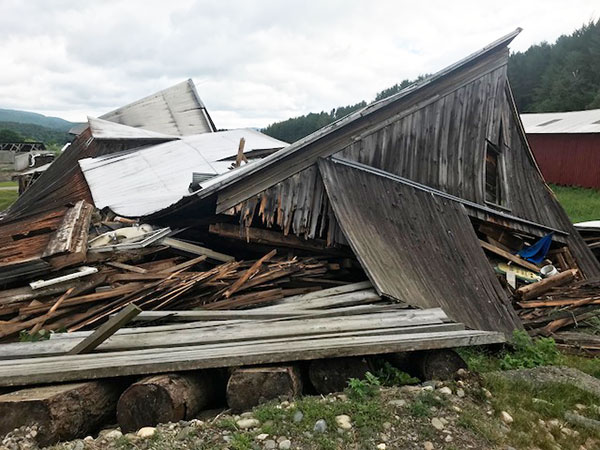 “To take down the big barn like it did, it had to hit the roof and just knocked it over. I think it had to be 80 miles an hour to do that. It totally blew out the back of the free-stall barn. It looks like a rocket exploded back there. The wind was high when it hit the buildings. The flowers and plants near our sign in front of the milk house were not touched,” he said.

“Other than nostalgia, there’s no reason to rebuild it and what I’ll get from insurance will let me rebuild what I need to for our operation today. But the reality is that I don’t need that barn and I’m not going to rebuild it for weddings or other events and if I did, I’d have to rebuild to fire and safety codes. That would take $1 million to do,” he said.

Neill’s father, Elwin Neill Sr., bought the dairy farm in the 1950s upgraded the foundation, pouring concrete side walls. They built the free-stall barn in the 1970s. To continue his meat farming, Neill will have to reroute some water and electricity and close off the back wall of the milk house which had been flush up against the big barn before the storm.

Prior to hitting the Neill property, the storm dropped trees by a house on Quarry Road in Waitsfield and then upended two sheds and an 80-year-old maple tree at the Wimble property on Route 100 while ripping the tops off more trees there.

Messer, who lives near the Neill Farm, was sitting outside with his wife, Carla, and watched the wall of water and rain cross The Valley.

“It cleared the ridge behind Owen Wimble’s house and stayed up high as it crossed the river and fields to hit the Neill barns high on the roof of the dairy barn and between the wall and roof of the free-stall barn,” Messer said.

He grabbed binoculars to see if he could see the Neill dairy barn and could not see it. Neill’s wife, Angela, was at their home at the time, Messer said, and did not hear the wind or storm as it approached. Wimble, who was upstairs in his house removing a fan from the window in anticipation of a storm, did hear the storm coming.

WATER CAME WITH A ROAR 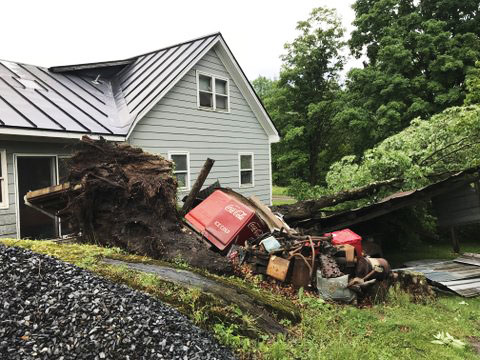 “I heard the wind start to whistle and a flood of water came with a roar. I looked at the maple tree a foot in front of me and bang, down it came. It wasn’t long, 10 seconds. That was a big maple tree, 3 feet thick and at least 75 to 80 years old. When the tree was uprooted, it flipped the porch over,” Owen Wimble said.

He said that the NWS investigators suggested that the winds were 60 mph, but disputed that, saying he’d experienced 50 to 60 mph winds before and they were nothing like what happened this week.

“That was a sheer wall of water that came by and came by fast. It laid that tree down like someone dropped it. The roots were 5 to 6 feet into the ledge.  It’s lucky no one got hurt,” he said.

The storm flipped over two of his sheds, one closer to the house that was apparently sitting on roots from the large maple because it flipped when the tree went down. The other, on the ridge to the northwest flipped as well. He had antique car parts and an antique 55 Ford, Coca Cola coolers and his tractor in the sheds. Those items sustained minor damage.

“After it passed, I looked outside and saw Mike Marino’s truck stopped in Route 100 where the road was blocked by branches. I got my excavator and we moved the trees to open the road.

Messer said that he expects to have a final report from the NWS early next week.