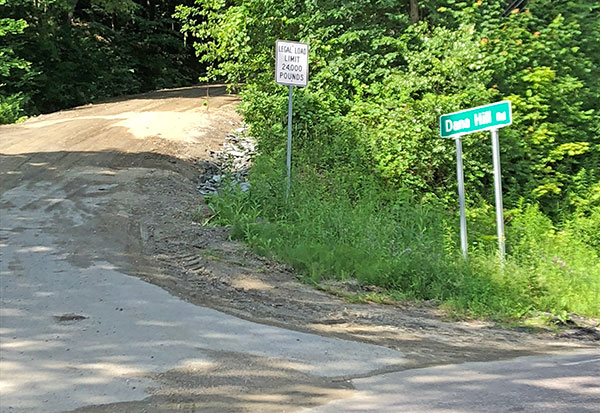 It’s not going to cost $1 million to bring Dana Hill Road into compliance with state standards, the cost could be as low at $10,000.

That’s the word from two members of the Waitsfield Select Board who made a site visit to the road last week with Jim Ryan, Vermont’s road compliance expert.

Select board chair Paul Hartshorn, at a prior meeting, suggested that bringing the 2-mile Class 4 road into compliance would cost $1 million.

Board members Kari Dolan and Sal Spinosa met Ryan at the road for a preview of a July 18 site visit that is part of the official process of the town potentially reclassifying the Class 4 road as a trail.

Dolan debriefed the board at its June 25 meeting and told the board that there’s really only one section of the road that is particularly worrisome due to gullying.

“The rest of the road, although degraded is not bad. There are degraded water bars and a need for more water bars to keep the road from channeling and running down the road,” Dolan said.

There is a 50-foot section of road where the town would run into compliance issues with the municipal road general permit which Ryan estimated could be fixed in a day or two. That work would entail stabilizing the gully and fixing culverts, a number of which were partially clogged and several that needed the outfall area modified.

Dolan told the board and Dana Hill Road residents who were present at the meeting that Ryan was preparing a trip report that would detail his preliminary findings and recommendations.

“He will also flag areas where he thinks more water bars are needed,” Dolan said.

“The other good news, in addition to knowing it’s not going to cost $1 million, is his recommendation that the town work with landowners to come up with a maintenance plan for the road to address the ‘rilling’ that is occurring,” Dolan added, explaining that rilling is what happens when water runs straight down a hill, eroding the road bed.

The third piece of good news, Dolan told the board is the fact that there are state and federal grant funds available through the Lake Champlain Basin program and the Central Vermont Regional Planning Commission and VTrans.

“Through the federal grant program, they’re looking for Class 4 roads in the area to stabilize for best practices case studies and for training other road crews around the state because many towns are grappling with similar issues,” Dolan said.

“So, we have access to funding and if we can work in partnership with landowners on the match we can do more than simply address the gully. Maybe we can put together a restoration plan that address these other needs,” she added.

She also told the board that the town might be able to work with the Vermont Youth Conservation Corps to have some of the work done.

Spinosa reminded those present that the town had begun the official process of reclassifying the road and said he didn’t want people to get the wrong impression. He also asked for an inventory of who lives on the road and what portion of the year they do so.

Board member Jon Jamieson asked if the road foreman would be present and Hartshorn said he hoped so.

Road resident Russ Chalom asked if anyone from the state would be present and was told they’d been informed of the site visit.

“They’ll be knowledgeable about other funding sources that are available and they’ll be doing a lot of logging up there in the next couple of years,” Chalom said.

Dolan told the board and the public that Ryan had also suggested paving the short Class 3 section at the bottom of Dana Hill Road but pointed out that unless the road was repaired above it, it would be a waste of money.