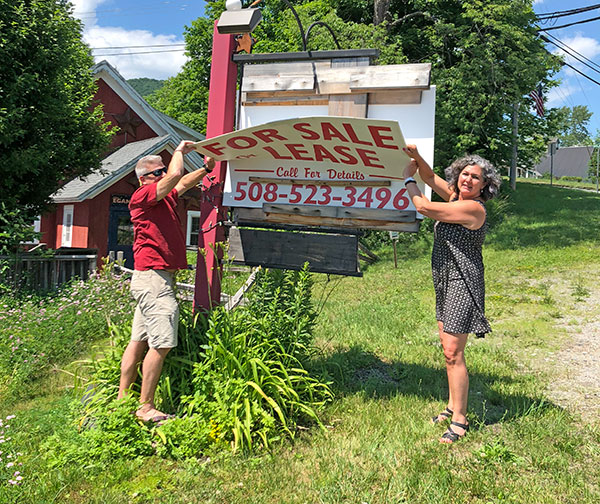 Come November, there’ll be a new restaurant in The Valley – in a location that has long been vacant.

Ana Dan and Paul Weber, owners of the Hyde Away Inn and Restaurant in Fayston, closed on the purchase of the former Egan’s Restaurant on the corner of Route 17 and 100 in Waitsfield on June 28. They plan to open a new restaurant in the space and anticipate opening in November.

After some rehabilitation and minor upfitting, they’ll open Sage in that spot. While they’re still working on the menu, they expect it to be very different from the fare that they offer at the Hyde Away.

“Our continued investment in The Valley speaks for how bullish Paul and I are on prospects here.  With new businesses, such as Lawson’s, choosing to grow here and the work of the chamber to market this destination, we really see great potential for growing economic vitality,” Dan explained.

“We’ll be getting the menu worked out pretty quickly because you need to know what you’re going to be serving before you finalize the kitchen,” Dan said.

Dan and Weber purchased the Hyde Away three years go from Bruce Hyde and Margaret DeFoor.

“It’s been three years and we’ve invested so heavily in the Hyde Away. Finally, we’re at a point where the heavy lifting and a lot of the work is done. Obviously, there are still things to do, but much is done. We started looking for a new project and a restaurant was one of the ideas. What really pushed us towards the restaurant was the fact that we have a management team already in place that can handle the new project,” she said.

Hyde Away chef Chris Harmon will continue as executive chef for both restaurants and Jean Wry, the front of house and events manager will also be part of the management team for both venues.

“While we start shaping what is to become Sage, we will be recruiting for a chef de cuisine and an assistant manager to join the team,” Dan said, adding that the new business would create the equivalent of approximately 10 full-time jobs.

There are two rental units with the property, an apartment upstairs and a commercial office space downstairs. Both existing tenants will remain.

“I know there is a lot of interest in what this iconic location will become, so we’ve set up a way to bring everyone along on the journey.  You can start following Sage now at facebook.com/dineatsage, Instagram.com/dineatsage or email us your contact info at This email address is being protected from spambots. You need JavaScript enabled to view it..  For all those that follow or sign up, we will take you along on the transformation journey with pics and reveals and prior to opening you will be invited to a special soft-launch event at the restaurant.  We’re very excited to start work on this project,” Dan said.

HAI Hospitality Inc. is the business entity that owns and operates both Hyde Away Inn and Sage. Dan and Weber own HAI.