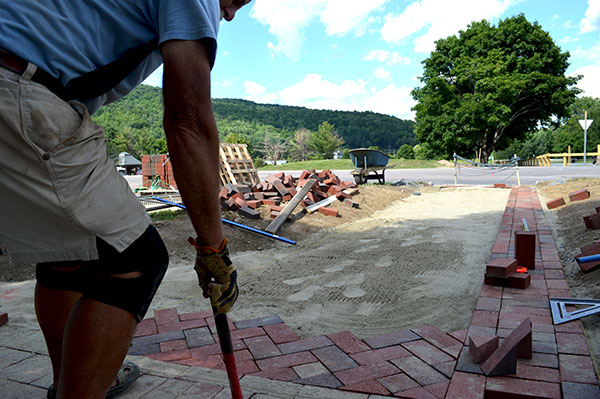 If Mad River Valley residents and visitors were near the busy intersection at Mad River Green Shops between the Mad River Taste Place and Shaw’s, they could’ve seen the four-man crew led by one of the town’s most visible volunteers, Charlie Hosford, as they laid a new brick sidewalk down.

The pathway that the volunteers are working on is part of the Mad River Path Association’s Heart of The Valley project. It will connect the Waitsfield Farmers’ Market and Mad River Green Shops to the existing portion of the Mad River Path that connects to Winter Park, Lawson’s Finest and the Big Picture. The area now has a newly laid brick section as well as a gravel section with a fence and there are plans to have benches and a bike rack for visitors to use in the future.

“Personally, it’s fun to have an idea of what it’s going to look like,” said Hosford, as he took time out of his work to sit on a 5-gallon bucket to talk about the project. “Everything we do takes a permit or an agreement with the landowner. We started forms for this project over a year ago,” added Hosford, Waitsfield, a former long-term member and chair of the Waitsfield Select Board.

The Mad River Path Association designed the path and raised the funds to support it from donations and grants. Funding for the project came from the Mad River Valley Rotary, personal donations and from local businesses that hope the path will bring in more people to the area. The small work crews, consisting of Hosford, Sam Gulisano, Jay Seekins and Dave Hodgson, have been working on the path in their spare time.

“I love working on something,” said Hosford, who volunteers three to four days a week, weather depending. “I bring design and construction abilities and vision possibilities. This work allows me to get involved with a group of people and other generations I wouldn’t normally and hear what they’re thinking about, politically and socially,” said Hosford.

The work crew has made sure the pathway is wheelchair accessible; organizers also hope to see a crosswalk painted into place near the intersection of the Slow Road and Mad River Green Shops entrance. For aesthetics, Hosford hopes to see some flowers and garden beds put into place around the freshly patterned brick way, possibly by Mountain Gardeners.

Outside of his volunteer work, Hosford is also a member of the board of directors for Hannah’s House, Waitsfield. In his spare time, now that he is retired, Hosford stays busy with his volunteer work around The Valley and spending time with his family.

“I thought I had grandparenthood figured out; my grandchildren have introduced me to a world of magic,” said Hosford.

The next path project in the works is a boardwalk between Lawson’s Finest tap room and the Big Picture.