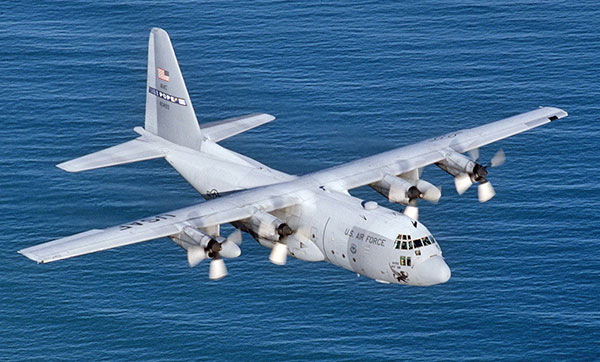 The Valley Reporter has learned that the two large C130 military transport aircraft that flew low and fast across The Valley from southwest to northeast on Monday, August 29, shortly after 2 p.m. were part of the Connecticut Air National Guard, operating out of Bradley Air National Guard Base in Connecticut.

Public affairs officer Lt. Jennifer Pierce confirmed that the planes were on a training mission and that they crossed The Valley at 2:08 p.m., flying at 600 feet above the ground in a populated area. They were flying low to stay off radar to simulate flying into hostile territory she said.

She said that the flights were coordinated with the FAA – although FAA public affairs officer Jim Peters was unaware of the flight. Pierce said often training missions and routes are approved without specific dates for the training missions.

The planes started from and returned to Bradley Air National Guard Base. C130s are 97.9 feet long with a 132-foot wing span and a cruising speed of 374 mph. They fly with a crew of five.