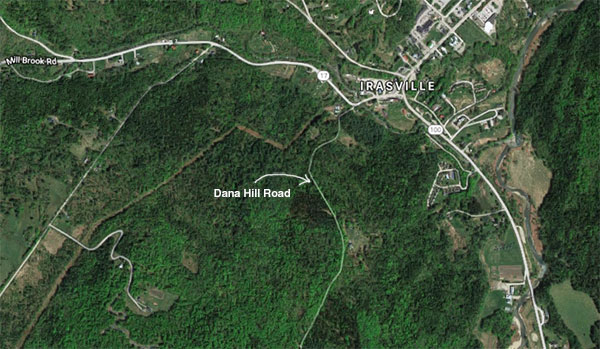 Four of Waitsfield’s five select board members came around to the idea of keeping Dana Hill Road a Class 4B road.

Board members Kari Dolan and Darryl Forrest stayed the course from the positions they’d taken at previous meetings -- that the town should not downgrade Dana Hill Road to a recreational trail. Board members Jon Jamieson and Sal Spinosa, at the board’s August 27 meeting, explained how they’d come to reject the downgrade option as well.

Board chair Paul Hartshorn was the sole vote against a motion to reject the process of downgrading the road at this week’s meeting.

The board has devoted several meetings and site visits on the issue, which was raised earlier this summer as the town looks at how to bring all of its roads into compliance with the state’s new road standards, as required for the general municipal roads permit.

The Class 4B road, which is home to a half dozen residences, an outdoor wilderness therapy school, and access to the Howe Block of Camel’s Hump State Forest and its logging operations, is one of the town’s oldest roads and is increasingly very heavily used for recreation.

During the board’s first discussion of the road this summer, Hartshorn suggested that it would take over $1 million to bring the road up to the new state standards. After a site visit, the state’s road specialist, Jim Ryan, identified several areas of gullying that would need to be addressed and suggested it could cost as little as $15,000. Ryan also outlined two grant programs that could help fund 80 percent of the costs.

Throughout the summer, the board surveyed residents and road users, heard comments opposed to the reclassification and sought a filing extension from the grant organizations.

It all came to a head this week when Dolan and Forrest reiterated their opposition to reclassifying the road to a trail and were joined by Jamieson and Spinosa.

“This is a really unique road that was built for oxen and foot traffic. It wouldn’t be built the way it is if it were built today. We need to acknowledge that. It’s a safety liability, an economic liability and an environmental liability. There are a couple of ways to look at it: We can either ignore it and abandon it or we can own it and address it,” Jamieson said.

“Initially I thought we could find a middle-of-the-road solution where the town pays more attention to the road than it has in the past and that alleviates the liability of it in terms of the state mandates that are coming down. That won’t work because of our own road policies,” he continued.

“Dana Hill is unique in our quiver of Class 4 roads. I know most of them and I think Dana Hill is different. It is used by more people and usage of it is on the upswing. It is not being abandoned by the public; it is being embraced and used by the public and is somewhat of an economic driver, as well as being a liability,” Jamieson said before stating his support for keeping the road as a Class 4B road.

Spinosa echoed Jamieson, noting that the public feedback from residents and users was particularly helpful in his decision-making process.

“People live up there. If there isn’t some kind of road maintenance it’s going to be harder and harder to live and work up there. I have serious concerns about the Class 3 road below. It will continue to take a hit if we reclassify the road and the river becomes our responsibility and we could be on the receiving end of state enforcement action. We could be complicit in harmful discharge into state waters. Geoff Hand, True North’s attorney, pointed out that if the road is reduced to a trail we’re precluded from the functional approach of ‘Let's do something no matter what.’ That doesn’t work if it’s a trail,” Spinosa said.

“And we have no chance of getting funding if it’s a trail,” Spinosa added.

Forrest made a motion that called for abandoning the reclassification process, seeking grant funding and committing to regular annual maintenance starting next summer. Spinosa and Jamieson objected to committing to regular maintenance without a separate discussion. Dolan amended the motion to abandon the reclassification process and seek grant funding. It passed 4-1.