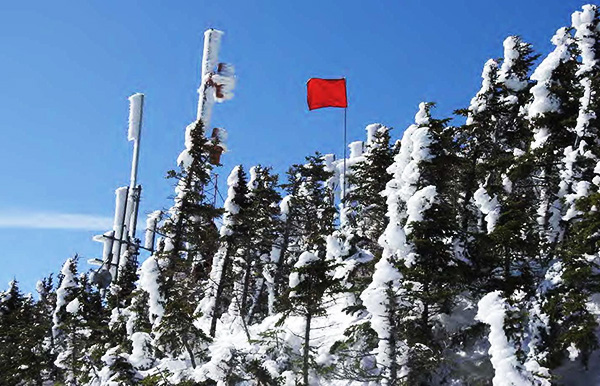 The squeaky wheel gets the grease. Sugarbush president Win Smith met with Tom Dunn, CEO of the Vermont Electric Power Company (VELCO), to discuss a proposed 140-foot tower on top of Lincoln Peak and the two agreed that a 30-foot tower might be a better option.

Smith and Dunn had a site visit on October 12. Smith said that the idea for the taller, 140-foot tower to replace the existing towers and antennas on Lincoln Peak came from the United States Forest Service (USFS).

“It’s a USFS policy to recommend consolidating everything onto one 140-foot tower. We’ve written to the forest service to express our preference in this location, for this configuration,” Smith said.

He said that the reaction from the local USFS people had been receptive. In addition to sharing that consensus with the USFS, the Warren Select Board and planning commission have been informed.

Smith voiced concerns several weeks ago when he learned of the plan, which had been in the works since March. He had not been aware of it and said that Dunn was also surprised that the ski area was not in the loop on the permitting process. The Vermont Public Utility Commission permits towers such as this.

Sugarbush leases the land where the towers are currently located from the USFS. The VELCO proposal calls for replacing an existing telecommunications tower and installing wireless communications equipment on and at the base of the new tower.

According to documents from the Vermont Public Utility Commission, VELCO and the USFS engaged in discussions about the project this spring and summer. On September 20, a second advance notice was sent to the town of Warren, and Sugarbush also obtained a copy. The second advance notice details the process by which VELCO and the USFS, through an “iterative dialogue,” came up with several scenarios.

Those scenarios include replacing an existing 10-foot tower with a new 30-foot tower that would eventually be expanded to 80 feet. A second option would be to build the 80-foot structure now (which will be in close proximity to the observation deck at the top of Lincoln Peak) and relocate all existing users at the site to the new structure. The third option is a single 140-foot structure to be located behind the existing equipment shelter, and 70 feet downslope (west/southwest) of the current VELCO tower. That proposal, according to the most recent communication from VELCO, through its attorneys at Downs Rachlin and Martin, is the preferred USFS alternative.

“Although no final decision will be made until later this year, a USFS representative has indicated at least an initial preference for building the 140' structure (option 3) because it would consolidate all users on to a single facility, involve substantially less tree clearing that would be the case with constructing a taller structure at the observation deck (option 2), and result in less visual impact overall than would be the case with option 2,” wrote attorney Elizabeth Kohler.