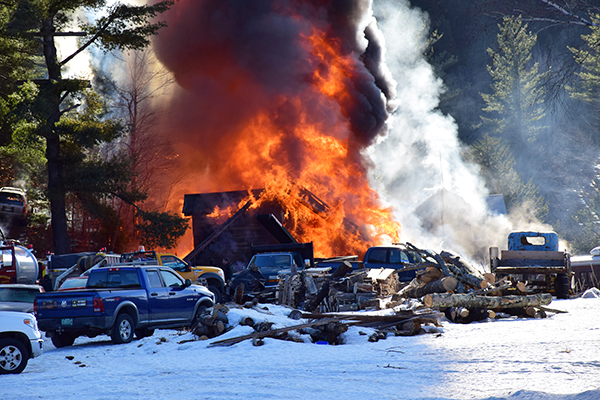 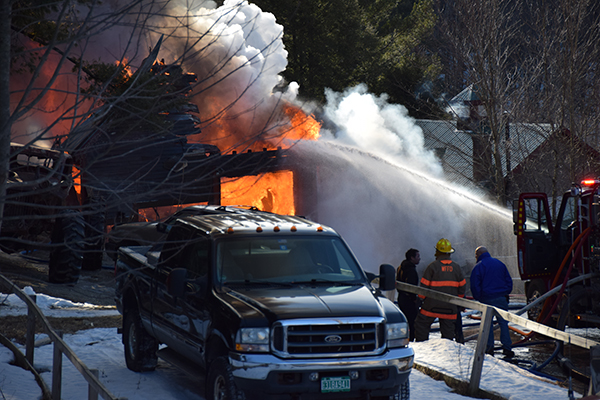 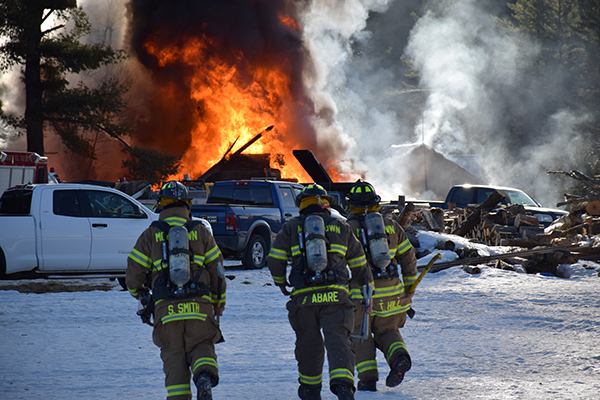 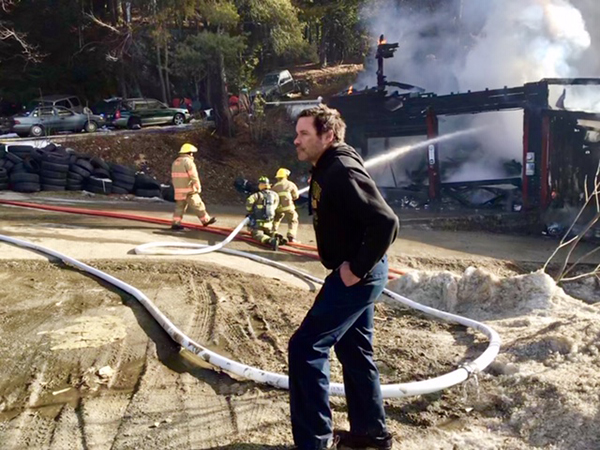 Tiger Baird looks on as firefighters battle the flames that destroyed his garage. Firefighters were able to save his adjacent residence. Photo: Andy Yeager
Previous Next

The state fire marshal is still investigating the cause of a three-alarm structure fire that destroyed Tiger’s Auto Repair in Waitsfield.

No one was injured in the Monday, February 11, blaze. Tiger Baird owns the shop.

The tall plume of white and then black smoke could be seen from many locations in The Valley and it was a volatile fire with explosions and flames climbing well above the roofline of the two-story building.

Cook said that the firefighters maintained a curtain of water on Baird’s home, located behind the shop, and were able to save the house although there were some cracked windows and scorching on the house. A nearby shed was also saved. Some 35 to 40 firefighters battled the blaze.

Assistant State Fire Marshal Chris Boyd reported that the origin of the fire was determined to be toward the back, right corner of the building where an oil boiler had been located. Due to the severity of the fire, the exact cause remains unknown at this time.

Baird has operated his business in that location for over two decades and said he will rebuild. He’s been overwhelmed by the outpouring of support he received in the wake of the fire.

“I might not be able to return all the calls and promises, but it’s a blessing to see God’s grace in people’s hearts as they pour out their love for us,” he said.

"We’re going to rebuild and I’m seeing God’s wisdom in this. They’re fixing the hydrant and something good’s going to come from this and firefighters will be safer,” he said, referring to a fire hydrant at the north end of Village Square Shopping Center that firefighters could not use because it was frozen.

Waitsfield-Fayston fire chief Cook said that the frozen hydrant meant that firefighters fought the blaze by having the tanker trucks from the three towns fill up at other hydrants continuously rather than having one hose hooked to the hydrant running to the site.

“It was a hot fire with lots of billowing smoke. There was a lot of fuel, oil, rubber and other flammables in the shop,” Cook said.

Cook said that one of Baird’s vehicles was in the shop and that several customers’ cars parked near the shop were damaged. He said it was fortunate that it was not windy and that the tall evergreen trees around the shop did not catch fire.

Cook said multiple people called 911 to report the fire. Baird was eating breakfast at Evergreen Place and saw the smoke from the fire shortly before he left to take his granddaughter to Waitsfield Elementary School. He thought something was burning behind Mehuron’s and did not notice it when he drove by. He received a call alerting him to the fire when he got to the school.

Darryl Forrest, chair of Waitsfield’s water commission, said that the issue of the frozen hydrant was being fixed this week and said that 20 of the 30 hydrants on the municipal water system had had issues, some of which had been fixed. He said the problem lies in seals that don’t seal properly after the lines are flushed, or seals that are nicked during flushing and sealing.