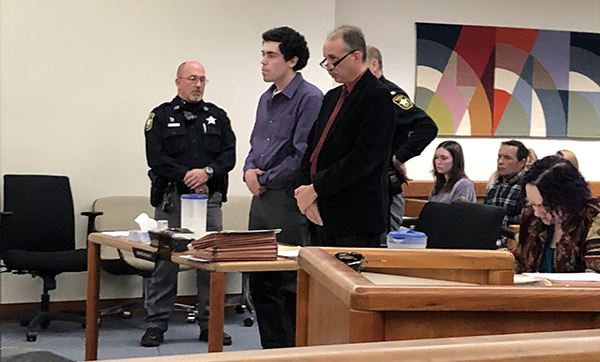 The Vermont Supreme Court rejected an appeal by Andrew Baird IV of his sentence of eight to 15 years for driving under the influence with injury resulting and zero to six months for violation of conditions of release twice.

The March 8 decision affirms the lower court decision. Baird IV, Waitsfield, was sentenced in December 2017 to eight to 16 years in prison for his role in a car crash that left Lily Stilwell, Fayston, paralyzed from the waist down. He was charged with driving under the influence with serious bodily harm resulting for the accident, which occurred in October 2016 when he was 19.

Baird and three others are charged in relationship to the October 14, 2016, car crash in Moretown. He and friends, including Stilwell, were drinking in Waitsfield. On the way home, Baird lost control of the car and it rolled. Stilwell was gravely injured during the accident and begged Baird to call 911. Two other friends, Jeremy Champney, Moretown, and Dakota Griswold, Waterbury, drove up on the scene of the accident and, with Baird, pulled Stilwell out of the car onto the side of the road and then lifted her again to put her into the other car and drove her to their home in Moretown. Only then was 911 called.

After arraignment, the court imposed conditions of release (COR) including that Baird not buy or drink any alcoholic beverage. He was charged in April and August 2017 with violating that condition of release (VCOR).

“After these charges were filed, defendant neither objected to the continuation of the no-alcohol prohibition nor claimed that he could not abide by it,” the court wrote.

“Defendant first challenges his VCOR on the grounds that the condition prohibiting him from buying, having or drinking alcohol was invalid because he was an alcoholic and, therefore, he was incapable of controlling his drinking,” the court wrote, noting that Baird conceded that he failed to challenge the condition in the trial court and argued that nonetheless imposition of the condition was plain error.

The court disagreed, noting that Baird was 20 at the time that condition was imposed and, therefore, the condition merely prohibited illegal conduct such as underage drinking. Further, the Supreme Court decision points out that the burden of challenging a no-alcohol condition rests with the defendant and in this case the defendant failed to meet the burden of introducing evidence to show that he lacked the ability to comply with such a condition.

Procedurally, the court found that Baird failed to timely establish that he was unable to obey the condition of release and that he was barred from challenging the validity of his conditions of release now.

Finally, the Supreme Court ruled that Baird’s argument that the court abused its discretion in imposing an eight- to 15-year sentence was without merit because it was based on the presumption that the VCOR convictions were invalid, which the court ruled was not the case.