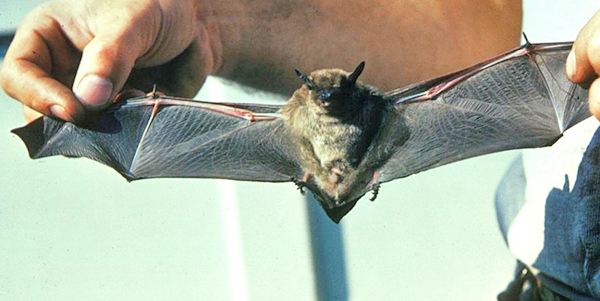 A handsome brown bat took up residence in the Joslin Memorial Library over the winter, hibernating during construction and renovations at the building on the corner of Main Street and Bridge Street in Waitsfield.

The bat was discovered by library director Katie Bourque-Johnson and some library volunteers on Friday, who were at a loss for what to do. They knew the bat had likely been hibernating and that recent warmer weather had awakened him.

“Coming out of hibernation, bats are disoriented and weak but not yet prepared to eat and must have water to prevent dehydration. It is too cold for them outside now, but since he is awake, he needs water and a warm place to readjust,” Bourque-Johnson said.

When first spotted, Geronimo – as his rescuers named him – was clinging to the beams near the ceiling of the library. Bourque-Johnson went in prepared to remove him from the beams on Saturday, with a window screen she duct-taped to the top of her 18-foot roof rake (necessity is the mother of invention). But the bat had been found on the floor and a patron put him outside before she got in. She was able to collect the bat from outside and put him in a box with a blanket.

“A couple hours later he was happily hanging upside down from the inside of the box when I put a medicine cap full of water in the box,” Bourque-Johnson said, something she said took all of her courage.

With the bat secure in her office, she began making calls looking for someone to take and rehab the bat.

“I know this is beyond everyone’s job description, but bats are vitally important to our ecosystem,” she said – continuing to summon her courage to give him more water.

She made multiple calls to multiple state offices and organizations as well as private individuals with a history of helping winged creatures.

Bourque-Johnson was able to connect with Alyssa Bennett, a Vermont state biologist, who picked up Geronimo and confirmed that he was a healthy male bat of the species big brown bat.

“Thank you for looking after Geronimo. (Best name ever!) Hopefully Geronimo will make it – he'd have no chance at all without you. I'll let you know how he's doing tomorrow. Thanks to you and your community! You're amazing people!” Bennett wrote in an email to Bourque-Johnson, who was heartened to hear that Geronimo was eating and drinking and doing well later that day.

The plan is for Geronimo to be transferred to the Vermont Bat Center later this week and when the temperatures warm up he will be released right next to the library, but he will need a library card to re-enter the library.

“Interestingly, there is a very tiny number of people who are licensed to care for animals who are rabies vectors in this state. People can call 1-800-4-RABIES which triggers an alert to these particular folks. The state biologist mentioned they have been inundated with calls this year about small mammals coming out of hibernation early and/or early births due to the fluctuating temps,” Bourque-Johnson added.