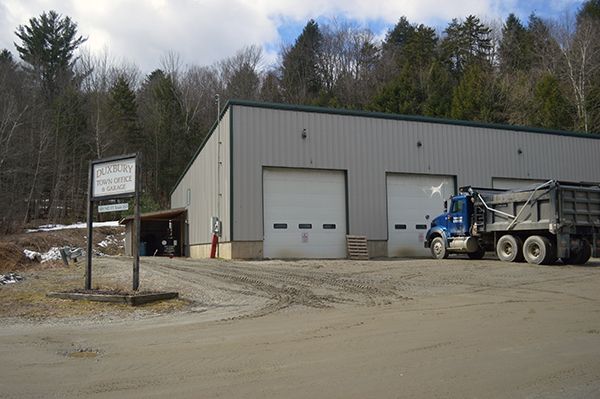 Heavy spring runoff and elevated river levels caused flooding near the bottom of Camel’s Hump Road in Duxbury this week, requiring the Duxbury road crew to repair the road and work to reopen the roads surrounding it.

As of April 17, Camel’s Hump at Marshall Road was reopened with work continuing on Mountain View and Richardson Roads.

That work took place against the backdrop of the town needing a new or renovated town garage, something that town voters were shocked to hear at Town Meeting this year. The work at the garage could cost between $400,000 and $500,000.

Road foreman Adam Magee provided a tour of the existing facility, pointing out where the back wall of the structure is jutting out at its bottom, where there are holes in the ceiling and unsupported steel beams looming over town trucks. The steel to build the beams supporting the roof was part of a pre-existing building built in 2005.

Beams can be seen bending due to the roof sliding and rocking. The back wall of the garage has winter snow and ice buildup that smashes into the building due to a lack of overhang roof coverage. Another concern with the roofing is a collapse from snow pressure.

Magee said that the select board in 2014 had the chance to address the structure issues but did not. When asked in a perfect world what he would change for his department, Magee said, “I’m very happy with the equipment we have. Duxbury has made a huge investment in equipment. Of course, as I would think any foreman would tell you, more staff or equipment would be great, but as foremen we have to be responsible with taxpayer money and only as for what is 100 percent necessary,” said Magee.

The Duxbury Select Board is taking steps to address the town garage. On April 8 the board asked select board member Kevin Garcia to contact DeWolfe Engineering directly to discuss town garage options. The board had previously received an engineering estimate from DeWolfe of $400,000 to $500,000 to rebuild the building in its current state, according to the select board minutes from March 11 and confirmed by Jonathan DeLaBruere, select board assistant. That work included structural fixes, roof replacement and thermal envelope package work.

If Duxbury chooses not to accept the standards, the town could see less funding for mileage, application scoring to VTrans grants, and the town won’t receive full funding for FEMA funds if there are any damages from floods, etc.

The first pertains to municipal road standards. The second, Class 4 road standards. Standard 3, perennial stream/bridge and culvert standards, includes the definition of perennial stream. Standard 4 is intermittent stream crossings, defined as “streams with beds of bare earthen material that run during seasonal high flows but are disconnected from the annual mean groundwater level.”

Standard five is roadway construction standards that indicated that all new or substantially reconstructed gravel roads must have at least 12 inches of a gravel subbase, with an additional 3 inches minimum top course of crushed gravel. All new or substantially reconstructed paved roads shall have at least 15 inches of gravel subbase.

When asked what the biggest struggle the Duxbury road crew is facing, Magee responded via email: “I would say it would have to be Act 64. There are some big changes coming to all towns when it comes to this new law. We will need to adjust accordingly.”

On the topic of budgeting concerns and future impacts implicated by Act 64, he said, “It will impact us greatly. The ditching stone and any kind of erosion would need to go up in our budget. I would say fuel and truck wear and tear would need to go up as well because of the trucking we would need to do to get the stone in South Barre,” replied Magee.

Including Magee, there are three full-time employees. Duxbury is currently looking for a seasonal employee to help haul gravel and stone for summer projects.