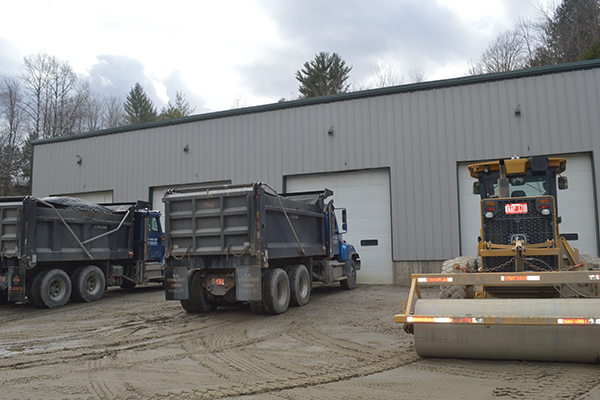 Since the spring of 2019 has been a washout to say the least in Duxbury, town road foreman Adam Magee is proactively looking ahead to the 2021 highway budget.

During a special Duxbury Select Board meeting on June 17, Magee went line item by line item through the budget with select board members to see what items could be adjusted for the 2021 budget. Magee compared the 2020 budget to the town’s actual spending on materials and labor. To get further input, Magee asked prior road crew worker Scott Woodard and past board chair Mark Morse to attend and share opinions.

Select board members hope that by holding a series of special meetings that address budget items, community members will see the effort they are making to be more transparent. Board members noted that Duxbury has a lot of needs, especially around money, and seems to be running into constant crises and taxing its three-person road crew.

Reviewing the budget, Magee said that the town could afford to drop the amount of sand purchased from 6,000 yards to 5,000 in order to reduce the 2021 budget. This item would have to be looked into as it depends on the price of supplies. Town treasurer David Specht was present and expressed concern about jumping the gun on premature cutbacks.

Magee said he is being optimistic and said that the town does not expect to hit the sand reserves as hard this coming winter. Magee said the reason they did this past winter was because prior to this past budget the town only purchased 4,000 yards before going back up to 6,000, which Magee said was too much. Magee thinks the road crew can maintain the roads with 5,000. Specht was concerned that if the highway runs out of sand early due to another unexpected early winter, taxpayers would not respond lightly to the crew asking for more money.

For hauling materials this year, Magee estimated that the town will spend over its budget by $1,500. Magee explained that Duxbury did not take into account waiting in Waterbury construction traffic while hauling materials, making the commute time longer. Magee said he wanted to do more number crunching before putting a number to the amount and look at other sand /gravel companies to compare prices.

Traditionally, Duxbury has used the Bolton pits to haul gravel from, since Duxbury does not have its own pit. The line item for the current budget was set for $6,000 and the crew is currently at $5,500. Magee suggested contracting out work, or starting a new line item in case the town does decide to subcontract hauling or other work. Board members discussed the pros and cons to subcontracting work because by doing so the road crew could focus more on other maintenance and annual upkeep while a hired contractor hauls materials. Spring rainstorms have kept the Duxbury crew to Camel’s Hump Road and nearby roads for a month; other road projects have been set back, majorly affecting roads for the long term.

Woodard added that the town could change its gravel product for another kind. A change could be costly, but the roads would see better product and a different scale of gravel could last longer on roads. Woodard recommended looking into gravel from South Barre. Magee was open to trying new product and looking into prices and the time it would take to haul it from the pit to Duxbury compared to Bolton.

Magee added that other towns are in the same situation as Duxbury, struggling to keep up with the need for gravel used in ditching and road maintenance. Magee added that if prices go up, towns won’t be able to afford the costs to maintain roadways. Duxbury currently has a mutual aid understanding with Moretown, where both towns can borrow drivers and trucks for work.

Back to the subcontracting suggestion, Magee thought doing so would help the highway get back on track with regular maintenance. Magee said that most of the roads in the 35 miles of roads in Duxbury need ditching, including Dowsville Road, which needs its entire length done.

Select board member Kevin Garcia asked how long it would take to bring ditches up to standards if ditching was the only project the crew had. Magee estimated around seven years as it would be 70 miles of ditching. This is because town ditch life span isn’t what it used to be, lasting only a few years, especially with the new state regulations due to the state’s Clean Water Act. Group discussion reflected road maintenance was like a runaway ballgame, where the town would catch up to a short lead, just to have the other team (roads, the state regulations, weather conditions) come back in the ninth inning and having to play catchup all over again.

Line items such as mowing, signs, machine rentals and chloride were discussed, as the select board made suggestions. Magee will look into pricing and cost estimates. The 2021 budget conversation will continue when the Duxbury Select Board schedules another special meeting.