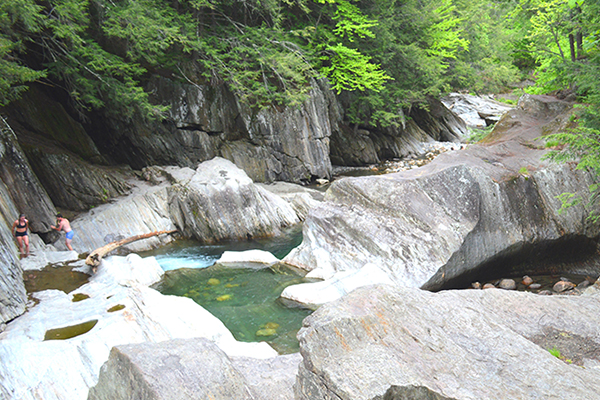 Parking at Warren Falls on a normal weekend can be tricky. But on a weekend when temperatures soared in the 90s, like last weekend, made for an unsafe situation with cars parked on both sides of the Route 100 in both directions, impeding the flow of traffic.

Is towing cars that are improperly parked the solution? That was a question raised at the Warren Select Board meeting this week.

Board members discussed parking and safety concerns over residents and visitors parking along Route 100 at a July 23 meeting.

Warren constable Gene Bifano proposed the town could write tickets to those who park in a roadway. Bifano said he was at one site last week when an individual parked along the roadway by a sign that prohibited parking. He said he had to knock on the individual’s window to point out the sign.

He suggested that the town write tickets. Select board chair Andy Cunningham said he didn’t think Warren wanted to be the town to ticket individuals for swimming on hot days. Other select board members disagreed as it was a safety hazard.

“It’s not that we are preventing them from swimming, we’re saying 50 people can go swimming,” said board member Randy Graves.

“There were several hundred people at Warren Falls this past weekend at one point. Our law enforcement officer estimated more than a couple hundred … the road was a circus; they were parked right in front of Warren Falls, parked where they weren’t supposed to be. He called the sheriff to come down and he issued a handful-plus of violation notices in our parking lot,” said U.S. Forest Service district ranger Chris Mattrick added,

When select board members asked how effective towing vehicles was, other board members said that someone would just fill the newly spot. Cunningham asked whether the Mad River Valley Chamber of Commerce could provide a bus to transport people from the municipal building to Warren Falls. Other board members noted that the chamber may question where the funding would come from.

Warren town administrator Cindi Jones said via email, “We are talking to the state concerning a tow away zone or zone that says owners will be towed at their expense.”

She said the state has put up flashing yellow lights with a sign that says recreational area ahead on both sides to help slow down traffic; they have put up the no parking signs as well.

Beyond Warren Falls and its parking problems, the board also heard concerns about the picnic area at the south end of Warren near Austin Brook where there have been issues with people camping and also using drugs and leaving needles behind.  The board discussed the issues with zoning administrator Ruth Robbins and Mattrick.

“If people are camping based on our regulations, they can camp, but no longer than 30 days, in other words, you would have to really patrol to see how long people are staying,” said Robbins.

There was some discussion of whether the picnic area was larger than an acre, which according to Warren’s zoning regulations affects how long a person(s) can stay there. Select board members thought the parcel was smaller than an acre and that the surrounding area was owned by the U.S. Forest Service.

Town constable Jeff Cambell, who was present at the meeting, added that the constables received calls from families who found needles in the picnic area fire pit.

“It’s also becoming a place for people to shoot up, I found six needles in one of the campfires … and somebody actually called and left a message on the voicemail saying, ‘We stopped there and we were just coming through’, I think it was Jeffersonville, ‘and we stopped there and our kids happened to see needles in the fire pit’,” said Campbell.

Mattrick echoed that other areas along the Austin Brook across the river are known for things like that and for individuals to overstay their welcome. Mattrick added that those areas were a ‘hot bed’ for that sort of activity. Camping for 14 days in a 30-day period is legal in the Green Mountain National Forest except in developed areas. Campers cannot go to different portions of the forest to extend their stay beyond 14 days to avoid people living and setting up for long term in the national forest.

Select board members decided to try more signage, constable patrols and an ordinance to prevent this from happening in other town-owned parcels.