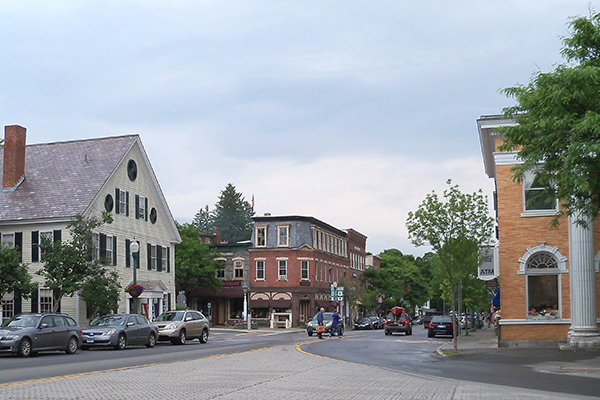 When Woodstock voters approved a local option tax (LOT), there were concerns that it would drive tourists away from the town of 3,000 people in southern Vermont. But that didn’t happen. It increased tourism revenues based on the yield of the local option tax year over year.

The LOT was adopted at Town Meeting in 2015. In its first year the yield –after the state took its 30 percent – was $208,000. The second year that amount increased to $250,000, an increase of 20.2 percent. In its third and fourth years the yield leveled off to reflect a consistent 8 percent growth since it was started, according to Jonathon Spector who is chair of the Woodstock Economic Development Commission (WEDC). In 2018 the LOT yield was $290,000 Spector said.

Charlie Kimbell, former chair and co-chair of the WEDC, as well as a state representative, was involved in the town’s WEDC from the start.  He said that the earlier attempt to pass an LOT was in 2005 and the LOT was specifically aimed at purchasing some property to create parking in the town.

“After that failed vote, a group was formed to look at sustainable development. It was largely a volunteer effort that led to the EDC commission being formed. We operated from 2006-2009 and in the end, we decided that we needed a source of funds to do the work we’d identified as necessary fostering our economy,” Kimbell said.

Without funds the WEDC went dormant until a member of the town select board raised the idea of an LOT to fund the economic development ideas that commission had raised.  Kimbell organized a campaign to support the idea of an LOT without retail sales included and it passed. The select board initially planned to create a five-member board to disburse the funds, but ended up with a nine-person board because the select board was impressed with all those who applied.

Spector explained that the WEDC grants funds community grants which are typically proposed by nonprofit organizations, sometimes the town and sometimes an individual business.

“We have an incentive program called the Store Front incentive. If a new business is filling an empty store front, we’ll subsidize their rent for a year,” he said.

The second thing that is funded are projects proposed by the WEDC.

“For example, we proposed putting 20 percent into marketing Woodstock so we’re funding a social media person and marketing,” Spector said.

“Big projects that we’ve worked on include housing and getting people to move to Woodstock. That’s a priority for us. We’ve worked to increase housing and related services such as child care. We make grants for physical amenities such as beautifying a park, and then the marketing and supporting local businesses and promoting the business environment,” he added.

The WEDC holds open public meetings and makes recommendations to the select board every month. There are specific guidelines for applying for grants and grands are funded three times a year.

Both Spector and Kimbell said there have been no discussions about expanding Woodstock’s LOT to include retail sales.

“What we’ve been working on is using the money as effectively as we can. It’s not easy because economic development is not easy. Rural small town economies are under a lot of pressure everywhere. There’s no silver bullet to turn it around. We’re experimenting and trying things and we’re seeing growth in the part of the economy covered by the LOT. We’re seeing growth that outpaces the economy,” Spector said.

There have been no efforts to rescind the LOT in Woodstock, although there have been differences of opinion on how the funds should be spent, Kimbell said.

Kimbell said that in Woodstock the WEDC is committed to using the funds for economic development rather than reducing the property tax rate by funding paving or other municipal costs.

Asked if he had any advice for the local proponents of a Mad River Valley LOT, he said it was important to have specific guidelines and goals and said that raising the funds requires clear objectives and processes for spending it.

“It’s also important to know that those who opposed our LOT for fear that it would have a negative impact on the economy were wrong. That has not happened. Those fears were not realized. Our economy is growing,” Kimbell said.