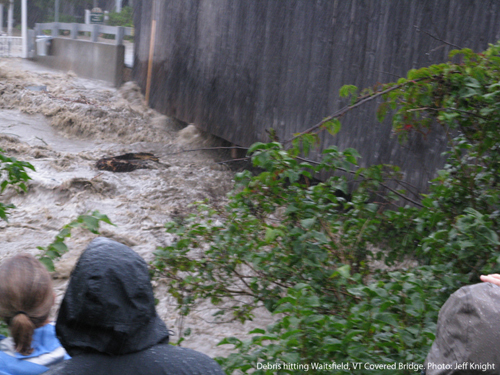 All of Waitsfield’s roads are open and passable with the exception of thru traffic on Bridge Street; the covered bridge remains closed to vehicles until further notice but is open to pedestrian and bicycle traffic.

A preliminary inspection of the covered bridge by engineers from Dubois and King indicated that it was “moderately damaged” by the storm.

The assessment letter details the damage sustained including a broken upstream arch, damaged diagonal supports, broken and dislodged siding boards and the collapse of the downstream wingwall at the south abutment. In addition, the roadway approach on the village side was undermined and portions of the sub base washed away.

According to the letter, “It is evident that the gravel/sand bar in the river that used to be upstream of the bridge was washed away and reformed downstream of the bridge. This is causing elevated water levels at the south abutment. Until the water level goes back down, we cannot make a full evaluation of the condition of this abutment. We recommend that the town, if possible, push some of the gravel aside so the water elevation comes down to a point where the south abutment is above the water line.”

Dubois and King recommended that the bridge remain closed to vehicular traffic until the bridge and approaches are repaired.

Replacement of the Floodwoods Road bridge is underway; the bridge was washed out during the flood last Sunday.

Covered Bridge Road in Warren is closed indefinitely following last weekend’s flooding that caused the undermining of the covered bridge. Flat Iron Road is also closed until at least next week, according to Town Administrator Cindi Hartshorn-Jones who plans to meet with a state stream alterations specialist this week.

Senor Road is closed but motorists are able to get out from both directions. The lower section of Fuller Hill Road (from Prickly Mountain Road down) is one lane but passable. All other roads in Warren are open presently.

Warren Department of Public Works director Barry Simpson said the covered bridge was seriously undermined by an eddy that was created when the river flowed through the bridge and had a backwash effect.

In addition, Simpson said the dam may have sustained some damage as did a retaining wall located behind Jim and Carol Groom’s house in Warren Village.

German Flats Road in Fayston saw the most significant damage as a result of flooding last weekend; approximately 1,500 feet of gravel and crushed stone was used to fill the blown-out section of road from Hidden Wood Road to the Fayston Elementary School.

Contractors from Kingsbury Construction in Waitsfield along with Fayston’s road crew worked to fill and resurface the road that is open to two-lane traffic. According to Fayston Select Board member Ed Read, the town hopes to pave the road before winter with at least a two-inch base until the planned repaving of the road this spring.

The town is also looking into stone lining the flood damaged ditches on sections of both German Flats Road and Center Fayston Road, per Vermont Agency of Transportation standards.

The bridge on the north end of Moretown Village won’t be open to vehicular traffic for at least two to three weeks after sustaining serious flood damage; the bridge at the southern end of town is now open to traffic. According to town officials, the Moretown Common Road is almost completely stabilized and bids are being put together for work that needs to be done.

Town officials said there will be some work done on a temporary basis to makes the roads safe and passable; some work may be undone only to be redone more sustainably.