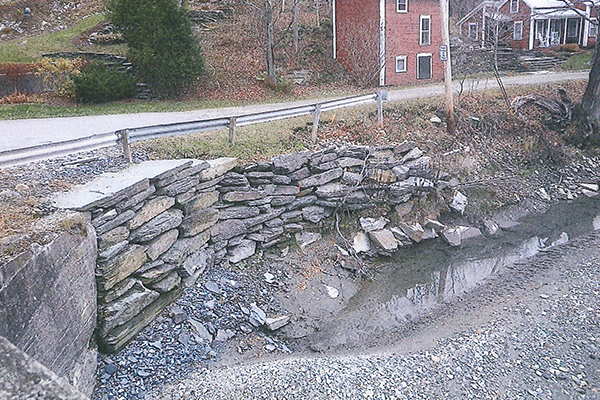 Warren Select Board members are in the process of reviewing what can be done about structural deficiencies on Mill Road in Warren.

Mark Bannon from Bannon Engineering suggested bank reinforcement options for Mill Road, which lies between Route 100 and Main Street in Warren. Bannon brought pictures of the project before select board members at the board’s August 13 meeting to show the current problems.

Tropical Storm Irene caused a large amount of erosion to the bank along the Mad River where Mill Road runs. Bannon reviewed his initial plans to build a stone wall with geogrid that holds very well. Geogrid is a geosynthetic material to reinforce walls or soils that are pulled apart under tension or in this case water and road usage.

In 2014, the late Barry Simpson, who worked for the Warren department of public works, applied for a hazardous mitigation grant for erosion issues. According to the cost estimate, this project will cost about $150,000. The town received the grant for $112,000. The remaining $38,000 will be paid by the town.

Bannon started working on the wall this past spring and found ledges downstream. Encountering the ledge condition and planning to have geogrid becomes problematic as without it the wall loses stability. In the spring, Bannon decided to shorten the project and bring it up to the telephone pole.

Bannon encountered another hiccup in planning when he viewed the site’s current guardrails. He found the guardrails had driven-in posts which would destabilize the geogrid if put there.

To proceed with the project, Bannon offered four solutions. The first is to do nothing. Option two is to do a maintenance project taking down the existing stones and restacking them and fitting them without the geogrid. This option would just have the guardrails reinstated.

The final option would be to extend the wing walls that are on the existing embankments. There would be a concrete wall with guardrails behind it. This would have aesthetic issues as it would take away from the historic look of Warren.

Bannon said he would be most comfortable putting in a high curb cut with a bridge railing on it as it would look the best. In that scenario they would follow their original plan with the stonework and geogrid. The poured concrete would be like a foundation setting with footings and cap the geogrid on the backside behind the stone. There would be about 2.5 feet subgrade in this design which is also the most expensive of the options.

The grant the town has for the project expires in April 13, 2020. Town administrator Cindi Jones added that the town is trying to get the project completed this year.

"Obviously in April you aren't going to do anything, can't do anything, so we're trying to get the permits so we can get this done this year. Kingsbury (Construction) is all set ready to go," said Jones.

Jones added that if the project does exceed the total, she has calculated funding from the roads and bridges budget that could be used.

Select board vice chair Bob Ackland said he would like cost estimates for two of the options the board was seriously considering. The board will receive the estimates and meet with Bannon at the next select board meeting.