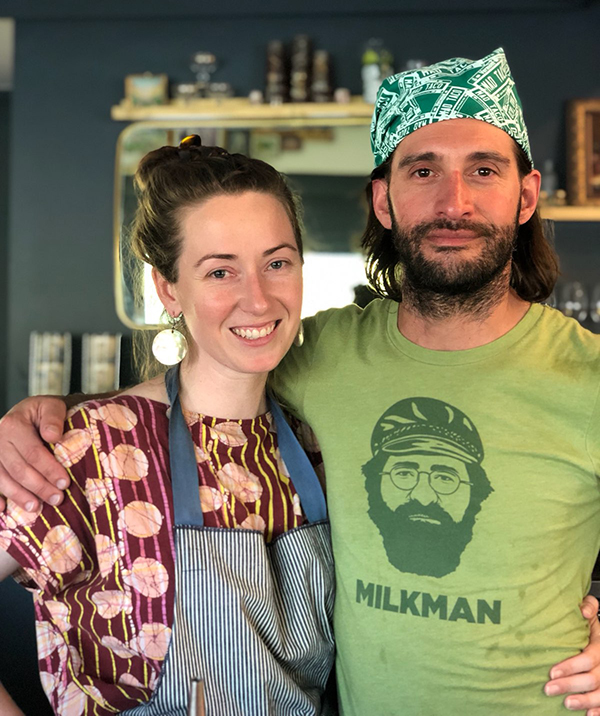 Folks may have noticed a new addition to Village Square Shopping Center in Waitsfield where a new mom-and-pop-style joint is producing innovative ramen dishes.

Stoke Ramen, the new eatery, is owned and operated by the husband-and-wife team of Colby Miller and Mimi Bain. The couple has lived in Warren for six years but has been around Vermont much longer. Miller is originally from Granville and Bain is from Orwell.

Stoke Ramen specializes in imaginative ramen bowls with small adventures into other dishes that inspire the couple. When asked what made them want to get into a new business and bring it to the area, the couple said they saw the need for something different in The Valley.

“Colby’s been making ramen for about a decade. After originally falling in love with the packet ramen when he was a kid, Colby first made his own ramen noodles while a chef at Hostel Tevere. It became a regular seasonal special that locals really loved. After an inspiring ski trip to Japan, he dove back in on nights off and really started dialing in, not just noodles but the entire bowl,” Bain said via email.

When the couple saw that a shop space in Village Square had opened up, they decided it was time to start something new on their own and specialize in something Miller loves to make.

“It’s a fabulous vehicle for the wonderful produce and meat that’s grown and raised in Vermont. We also think it’s the perfect apres fuel,” said Bain.

When asked what dishes have been most popular, Bain said, the “Let Me Shoyu Something” has taken off.

“It’s listed on the menu as ‘Colby’s Favorite’ and has a fresh, coastal flavor due to the dashi, a traditional Japanese broth made with kombu (seaweed), mushrooms and bonito flakes. It’s light but complex and with the tamari-marinated soft-boiled egg, bonito flakes and nori toppings – deeply satisfying,” Bain explained.

Another one of their dished was inspired by a car that had broken down outside their restaurant for two weeks. The red hot rod got a curry bowl called “I’m in Love With My Car” after the Queen song.

Bain said that their specialty (other than ramen) is their emphasis on making food for everyone. The couple is proud to have built their menu around the ability to feed anyone, regardless of restrictions, allergies or sensitivities.

The business has been in town for a month and Bain added they’ve been blown away by the community support they have received.

“Nourishing people is our passion, and we’re so happy that folks have come to see us on a weekly basis in so short a time. It’s deeply gratifying to see a full bar of happily slurping guests nightly,” Bain said. 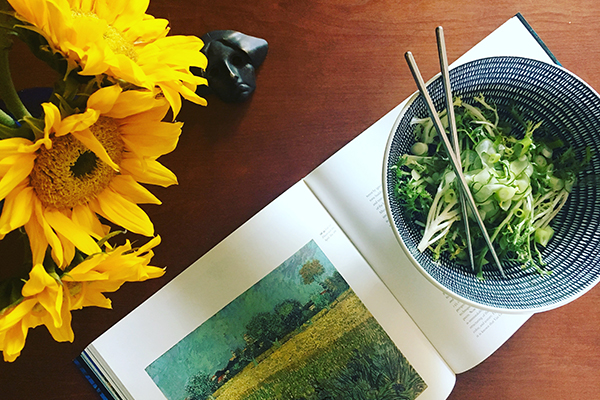 When asked the inspiration for the dishes, Bain said the ideas happen organically and added that when Miller is busy prepping on Saturday mornings, Bain will come in with a bag of finds from the farmers’ market to build a new fresh dish.

The style of the restaurant has been Bain’s passion project for the last year and a half as she visited many antique shops, estate sales and their own home to find the right decor.

Bain’s mother’s and other local artists’ pieces are on the walls, with a collection of art and cookbooks framing the small lounge area. The couple also added modern touches like USB chargers between the seats of the Vermont cherry bar. An open concept gives ramen eaters a front row seat to the show that Miller puts on in the kitchen.

“We love The Valley! It’s been our home for years and has ushered Colby through his career as chef (from humble beginnings behind the deli counter at The Warren Store). The people here are so special, and we honestly believe it’s one of the most beautiful places on Earth,” wrote Bain.