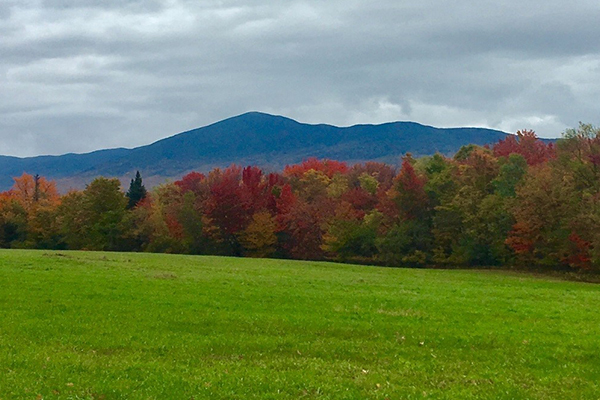 With shorter days and cooler nighttime temperatures, fall has arrived, ushering in foliage season. In Vermont, in the Green Mountain National Forest (GMNF), fall colors are expected to be most vibrant during the next couple of weeks in the higher elevations.

“America's public lands, particularly our eastern national forests, are among the most spectacular places to view the changes in fall colors," said acting U.S. Forest Service eastern regional forester Bob Lueckel. "I encourage you and your family to spend some time outdoors in the coming weeks and enjoy the sights, sounds and smells of nature this fall.”

“This is a special time for our residents, our visitors and our GMNF. We have already seen a lot of vibrant color in the higher elevations and expect that leaves will be near peak in some of the higher elevations this weekend and next,” said John Sinclair, forest supervisor for the Green Mountain and Finger Lakes National Forests. Sinclair also expects that there will be an influx of local and visitor traffic in the coming weeks and is encouraging motorists to be mindful of where they park and to use extra caution when driving and recreating in the GMNF.

The GMNF is one of the more heavily recreated national forests in the nation, serving between 3 million and 4 million visitors per year. Located within less than a day’s drive of more than 70 million people, the GMNF serves a wide variety of outdoor enthusiasts. In addition to foliage viewing, other recreational activities in the GMNF include camping, hunting, fishing, horseback riding, snowmobiling, hiking, mountain biking and alpine and cross-country skiing. Like many tourist destinations, the GMNF is a major contributor to local economies and has been recognized as having some of the nation’s most brilliant foliage viewsheds.

The New England area alone receives an estimated $8 billion annually in local revenues from fall visitors, who come from all over the world to see stunning mountainsides bathed in brilliant reds and oranges, mixed with stately evergreens.

Beginning each September, the forest service tracks the progress of fall color and is once again offering the public a website that can be visited for foliage updates, scenic hotspots and routes to take for peak viewing of fall colors on national forests across the region: Fall Color Report.

The mission of the U.S. Forest Service is to sustain the health, diversity and productivity of the nation’s forests and grasslands to meet the needs of present and future generations. The agency manages 193 million acres of public land, provides assistance to state and private landowners and maintains the largest forestry research organization in the world. Public lands that are managed by the forest service contribute more than $13 billion to the economy each year through visitor spending alone. Those same lands provide 20 percent of the nation’s clean water supply, a value estimated at $7.2 billion per year. The agency has either a direct or indirect role in stewardship of about 80 percent of the 850 million forested acres within the U.S., of which 100 million acres are urban forests where most Americans live. For more information, see www.fs.fed.us.