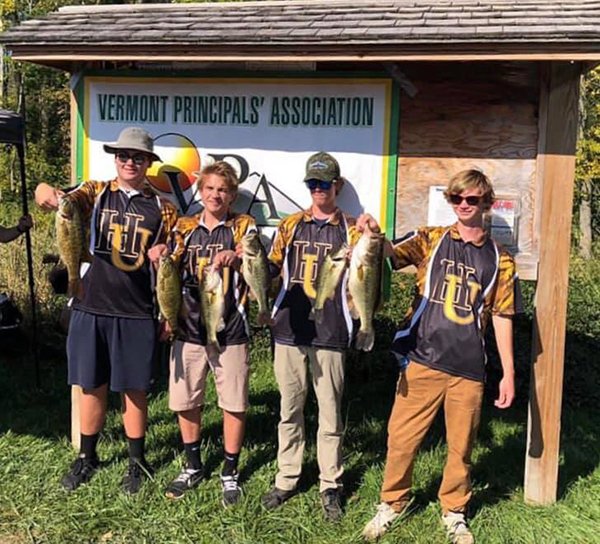 Harwood Union students can now compete in bass fishing, the newest club to be offered at the high school as of this fall.

The Bass Fishing Club, coached by Scott Green, was established this fall when students at the high school became interested and submitted forms to the director of athletics and activities, Chris Langevin.

Harwood is not the only school in the state to offer this club to students. Burr and Burton, CVU, Colchester, Essex, Fair Haven, Hartford, Milton, Mt. Abraham, North Country, Quarry Valley, Randolph, South Burlington, Twinfield, White River Valley and Windsor are the other schools participating this fall.

For practices, the club team learns in the classroom and casts their lines in a pond near the Harwood campus. “We are looking to expand that to include more on-the-water time in the future,” said Langevin.

Asked if the club has generated a lot of interest with the student body, Langevin said he could see the program taking off in the upcoming years. “Being that this was the inaugural season, and being limited to eight students, we ended up with 10 involved this year (two alternates). I think we could see it really take off in the future.”

Bass fishing was not the only sport added to the athletics program at Harwood. The school added middle school baseball and softball last year. At this time Langevin does not see and other sports being added.

“That being said, as new opportunities arise for our students, there could be something on the horizon we haven't even thought of yet. We always are looking to include as many students in our programming as possible.”

The Bass Fishing Club was included as a budget line item, but the school did not pay for any of the equipment. Students already had rods, reels and other necessities. Langevin added that the program had personal donations from local businesses to support the club.

For competition in this fall sport, Langevin said there are two tournaments for the club. One is the Vermont Principals’ Association High School Classic Tournament, which took place last week, and the VPA Vermont State Championship, which will be October 5.

“There is a six-hour window of fishing, and they base it off of weight. So you have six legal fish (12-inch minimum) and only small- and largemouth bass count toward your total weight,” said Langevin.