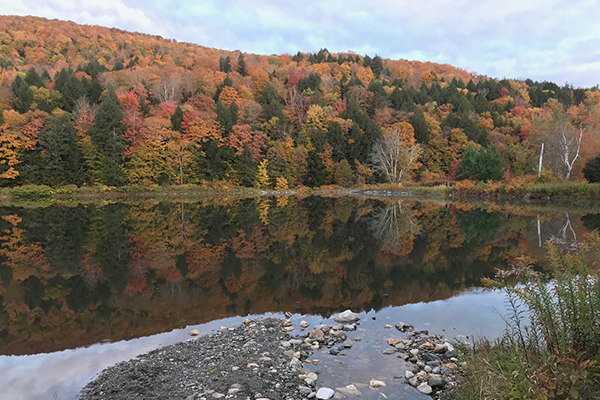 Resort president Win Smith and planning and compliance director Margo Wade were at the steering committee’s October 17 meeting to present the idea.

Both Wade and Smith reiterated that a second pond is a multi-year initiative, if it goes forward.

Smith said that snowmaking becomes increasingly important for ski resorts as the climate changes and said Sugarbush needs to be able to recover faster from extreme weather events.

The resort’s existing snowmaking pond on the Mad River near the Kingsbury Farm was originally permitted at 61 million gallons but budgetary and logistical issues during construction limited that pond to 25 million gallons of which 18 million are available to use, Smith said.

He said that should construction of a second pond go forward that would provide several benefits including greater flexibility in recovering from rain events, fire protection and potentially recreation.

Smith said that while the resort would use the same amount of snowmaking water that it currently does, the water would be used differently.

The Sugarbush snowmaking pond on the Mad River has twice been breached by flooding in July 1998 and in August 2011.

“The 1998 flood was in July and we were able to get it repaired in time for snowmaking in November,” Smith said.

Tropical Storm Irene in August 2011 required the resort to scramble for permits and to get it rebuilt in time for snowmaking.

A pond on the mountain would not be vulnerable to flooding in the Mad River.

The proposed site is 13 acres, relatively flat and abuts the Sugarbush Golf Course to the south. The new pond would be filled from the current pond. Sugarbush must maintain specific water levels in the Mad River for its current pond, but Smith said there are many, many days when the stream flow in the river is much higher than the proscribed level.

The 13-acre site under consideration provides wastewater fields for the Sugarbush Inn and part of Club Sugarbush and if plans move forward, those systems would need to move.

“We think we’ve got enough land of our own to relocate those septic fields. Think that’s all solvable,” Smith said.

Wade said that the second pond plan is a five-year project and if it goes forward it would come online in 2023.

The presentation came to the steering committee before Sugarbush’s November 13 announcement that Alterra Mountain Company would purchase the resort in early 2020. The issue is likely to come up at a November 20 community forum underway at the Gate House as The Valley Reporter goes to press.