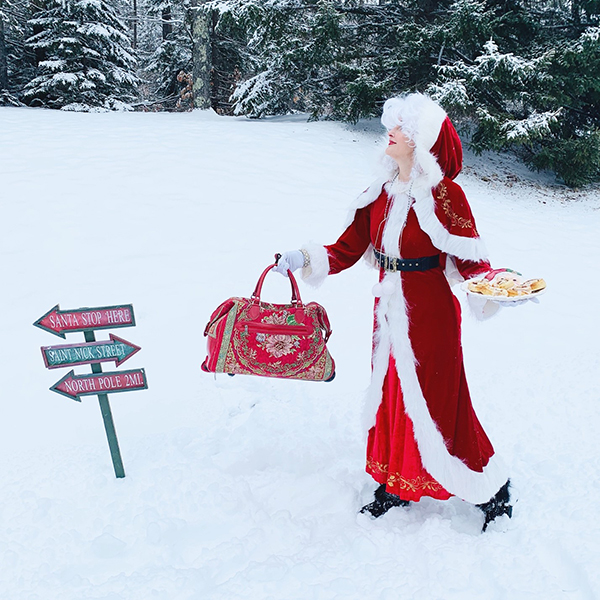 She did not provide a street name or house number, just the GPS coordinates of the meeting spot in Fayston. I’d been summoned to discuss her appearance at Three Mountain Cafe in Waitsfield on Saturday, December 14, and Sunday, December 15, from noon to 2 p.m., where she plans to meet with the children of the Mad River Valley, listen to their Christmas wishes, collect letters for Santa and accept donations to Prevent Child Abuse Vermont. But standing there, getting wind-whipped in the center of a forest-enshrined field with no sign of humanity, I was sure I had come to the wrong place. Then, through the bristles of the evergreen forest, she appeared.

She wore white gloves and a cherry red cloak. Her hair spun down her face in bouncy white ringlets. She had a bulging travel bag in one hand, a plate full of steaming cinnamon buns in the other. She offered me one. “Thank you, Mrs. Claus,” I said, pulling a sticky bun off the plate.

It’s not often that Mrs. Claus ventures away from the North Pole, so her visit to the Mad River Valley is a special treat. “The elves need me up there. Santa does delivery, but I run the whole operation,” she said. In addition to making cookies and caring for the elves, Mrs. Claus makes all the major decisions at the North Pole (like deciding which politicians go on the naughty and nice list) and manages overall operations and resources at the toy shop.

In addition to running the toy operation, Mrs. Claus is the sole caretaker of the 85,851 elves at the North Pole. “They are very picky eaters.”

“Working full time while raising elves is just plain hard. But I do it for love.”

Love is the cornerstone of Mrs. Claus’s life. According to her, meeting Santa was love at first sleigh ride: “When I was a young girl, I wanted to be a vet. So in my 20s I did a veterinary internship at a reindeer farm. At the time, Santa had just started working with reindeer, training them to drive the sleigh. He invited me on a sleigh ride. It was so cold, we snuggled up like two birds of a feather. Then some three years later, after one too many cups of hot chocolate, he got down on his knee and proposed,” she said.

Where is Santa now? “He’s in Washington state, meeting with Jeff,” said Claus, referring to Jeff Bezos, CEO of Amazon. “We’ve been meeting annually since 1994. Jeff is interested in how we run our operation, how we deliver presents so fast. We’ve shared a few of our managerial strategies with him, in hopes that nice families will receive packages all year round, since we only deliver once a year.”

Mrs. Claus is not worried about Amazon as a source of competition: “They do a good job. As good as you can do working with humans. But we have elves, the fastest toy makers, and reindeer, the fastest deliverers. You can’t beat that.”

Prevent Child Abuse Vermont is near and dear to her heart. The nonprofit’s mission is to promote and support healthy relationships within families, schools and communities to eliminate child abuse. In 2018, PCAV served over 16,000 children and parents, caregivers and educators through direct service and training. PCAV’s programs teach adults about how to nurture healthy development in children and emphasize adult responsibility for keeping children safe.

“This organization is very important to me,” said Claus. “It embodies the Christmas spirit.”