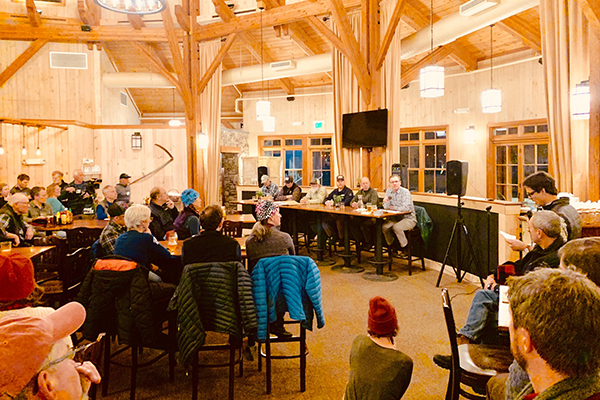 A ski trend is growing in The Valley. It’s like alpine skiing, just lose the heel-caging bindings and add the cardio. Backcountry skiing, which includes everything from skinning up the face of ski mountains to skiing through remote wilderness areas, has gotten so popular in The Valley that Sugarbush hosted a special event, the Earn-Your-Turns Roundtable,  to discuss the integration of this growing sport into the community. Rumble’s Bistro and Bar was packed Thursday night, December 5, as backcountry enthusiasts gathered to hear six panelists talk about the future of the sport.

Williams held the master list: a list of preplanned questions and talking points, which he drew from to stimulate discussion. 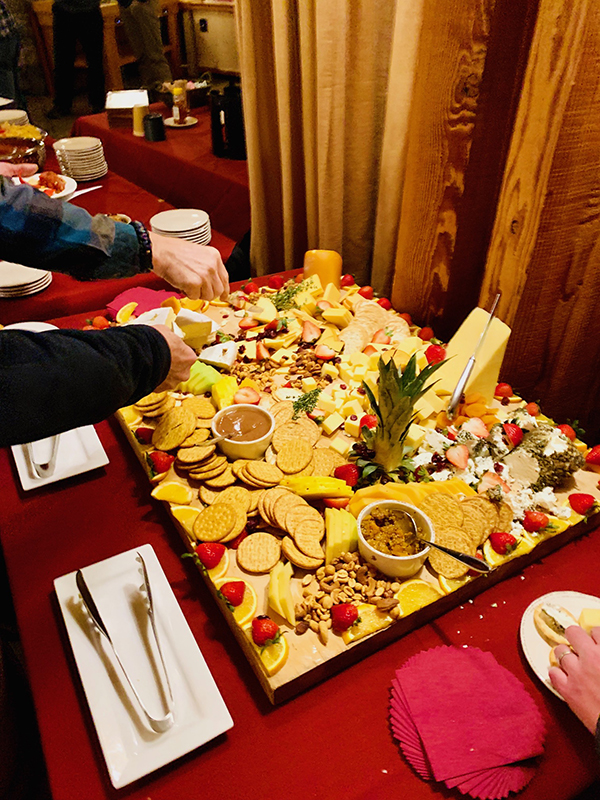 Safety was the first issue on the list. “We know that interest in backcountry skiing is growing. Has the number of search and rescue also increased?” Williams asked. The short answer was no.

“Statistics have been consistent over the years. We see variation tied to snow conditions. Most incidents come from alpine skiers who ski out of their designated ski area,” replied Van Dyke.

Panelists also commented on the conflicts between the backcountry and alpine skiing world. Williams directed his question toward the ski area operators at the table. “As ski area operators, what do you see as the challenges and opportunities presented by earn-your-turns enthusiasts?”

Listing opportunities first, Cascadden mentioned that backcountry enthusiasts have a lot to gain from Sugarbush, including guided tours up the mountain. The challenges, however, arise when backcountry skiers and groomers overlap. “Just like paper beats rock, groomer beats skinner,” said Cascadden, referring to backcountry skiers who like to go “front country” mode, skinning up groomed trails at Sugarbush before skiing back down.

Cascadden emphasized that people driving snowcats grooming the trails cannot see as well as one might think. “They are kicking up snow. On the best of conditions, they can see maybe 100 feet. Add wind and snow to that and their visibility drops to maybe 20 feet.” This limited visibility could pose a danger to skinners who are climbing the mountain at the same time that snowcats are grooming it. Cascadden also mentioned the dangers of the winch cat, a snowcat that lowers onto steep terrain with a cable. “As the operator descends and moves across the snow, that cable is pulled tight. Then it is let go. It could strike a skier. Those are some of the challenges we have working with uphill travelers,” said Cascadden.

Lillard voiced similar concerns. He mentioned that dealing with an unknown mass of uphill travelers is a challenge for the Mad River Glen employees who work to prepare the mountain every day. “They have 480-volt electric lines, water pressure hoses over 300 pounds, snow machines moving around and coming around corners,” said Lillard with concern for the safety of uphill travelers. However, Lillard’s primary concern still lies with MRG customers. “We are a lift service ski area first and foremost. Our product is power. We want to have a product for our lift service skiers,” he said.

In the most diplomatic way possible, both ski area representatives essentially told backcountry skiers that they don’t want to have to worry about crushing bodies with heavy machinery. But what do backcountry skiers want? Williams directed his next question at Sharp to learn more about the coalition’s goals.

“What is MRVBC looking to accomplish in the next few years?” asked Williams. Sharp listed three general components of the MRVBC mission: safety education, relationship building and enhancing backcountry terrain. An important thing to note here: When Sharp says backcountry he means backcountry, not face-of-the-ski-mountain “front country” or just-out-of-ski-patrol-bounds “side country.” For the MRVBC, backcountry skiing means being away from the ski resorts and taking on the environment “all in your own power.”

Mattrick spoke next, offering some advice to backcountry skiers interested in expanding their terrain. “You need a broad base of support. Start slow and small. You might think the concept of backcountry skiing is a great thing, but not everyone does.” He warned of the difficulty in accessing public land for backcountry skiing and praised the usefulness of communication and planning for successfully executing projects. “The wheels of bureaucracy turn slowly,” said Mattrick.

At this point in the discussion, audience members, who sat scattered around the room sporting different shades of the same North Face Tri-Climate jacket, clutched their beers a little tighter. If they couldn’t ski in the ski areas or on public land, then where could they go?

A roar of applause sounded from the audience at the mention of a backcountry hut. For although they may be too busy skiing to use it, backcountry skiers might finally have a place to call their own.