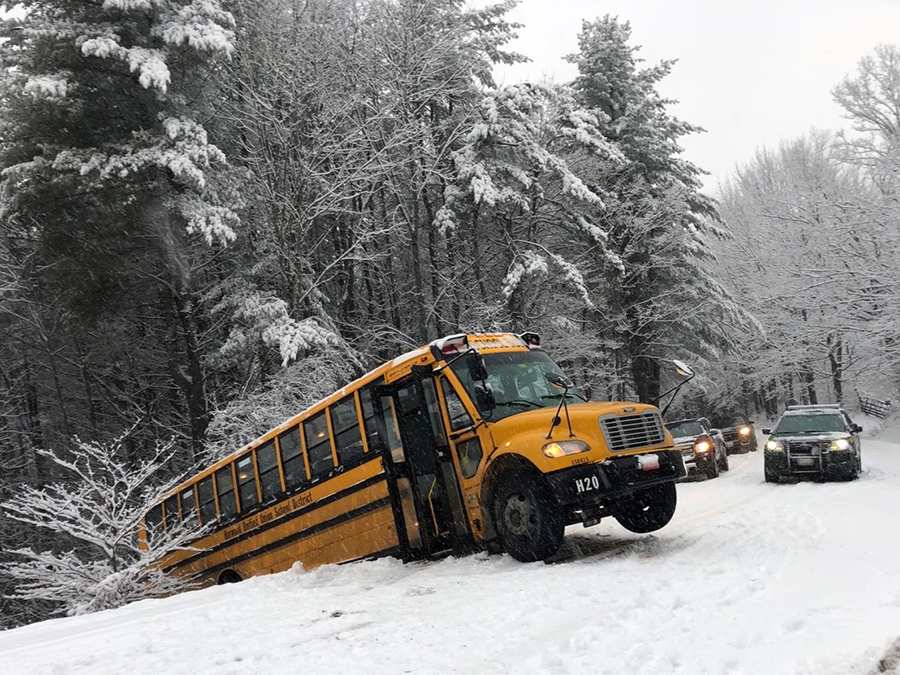 Driving up a steep, slippery road on Thursday morning, January 16, a Moretown school bus lost traction and slid backwards off a steep embankment on Moretown Common Road. The bus held students from Harwood Union High School and Moretown Elementary School. According to a police report, all students were evacuated, transferred to another bus and brought to school. No students were injured.

At 3:10 p.m. the same day, Harwood Unified Union School District (HUUSD) Superintendent Brigid Nease sent an email to parents, informing them of the accident. “Vermont roads were definitely at play today, but as you likely know there were no public schools delayed or closed in our region/county,” she stated. Nease mentioned that two Moretown buses were delayed that day, one of which “got stuck, waited for sand and went on its way” before arriving late to school.

“The second, Bus 20,” she continued, “at approximately 7:20 a.m. called in to report he was off the road and had slid into a ditch. All our safety protocols were followed. VSP and the fire department were dispatched because the back end of the bus was reported to be hanging over a drop-off area.” According to Nease, Vermont State Police controlled access to the scene and determined students were safe. Students were then transported to the replacement bus, which waited for them at the Moretown General Store, by the VSP in cruisers.

More difficulties occurred at the scene after the students had been transported, according to Nease. While two tow trucks pulled the bus back onto the road, one of the tow trucks slid off the embankment as well. No details were provided about how this issue was resolved.

At the scene, Bus Barn measured the tires and took a photo of the tread pattern. “The tires are snow rated and there are 22/32 tread depth on the inside of the outer dual wheel, which is more than substantial,” said Nease. “There does not appear to be any driver error,” she added.

As photos of the accident emerged on Facebook, parents and teachers of children in the accident voiced their frustration at the school administration’s lack of haste and clarity in communicating the gravity of the accident. “My children sat on this bus for an hour while it hung off a cliff. My oldest was a wreck in tears, freaked out. Then they had to stand outside for another hour. Meanwhile, I had no idea. I was home all day. If I had known, I would have rushed to get them. It’s horrifying and I’m beyond upset. All I got was an email stating buses were delayed, I had no idea it was this bad!” commented Kate Ruggles on a photo posted by the Friends of Moretown Facebook group.

On the same photo, teacher Brenda Hartshorn commented, “As a teacher welcoming young children into the classroom after this ‘delay,’ I would have appreciated knowing what the children had experienced so I could have provided better support. I was told there were two buses running late. This has happened in the past due to snow or mud but never with such a dramatic ordeal as these children experienced. Many of them were scared. I was not told any of the important details as an educator.”

Nease responded to the communication issue in her statement: “An initial message went out to parents that the bus was delayed because at that time that is all we knew. The Moretown and Harwood Union offices did the best they could fielding parent questions as the details became known, while the rest of us dealt with keeping the students safe and getting them to school,” said Nease.

(More information will be added as it becomes available.)