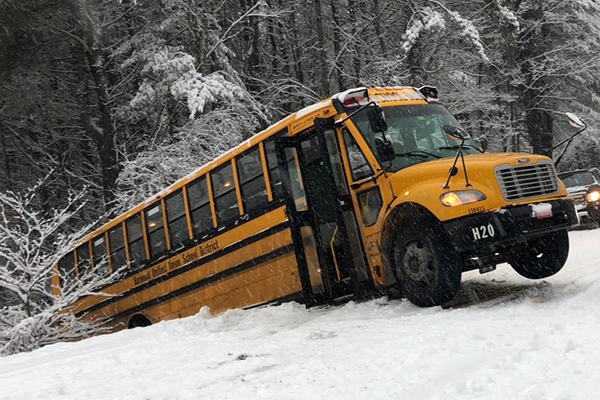 “They weren’t listening to me. The kids needed to get off that bus,” said Marti Ross, relaying her account of the HUUSD bus accident that happened on the morning of January 16. Ross, a retired teacher who lives on Moretown Common Road in Moretown, was the sole witness to the Thursday morning bus accident that has since shaken the community and cast a shadow of doubt over the credibility of the school administration’s communication with its transportation service, First Student. Roads were snow covered and slippery early that morning.

Ross was the first person to take command of the schoolchildren’s safety, demanding that the kids get off the bus, which was hanging over a steep embankment with its front wheels off the ground.

On Thursday, January 30, The Valley Reporter reached out to Ross, who immediately set the record straight about what happened that day. “The children were not in the house. There was one girl who needed to use the bathroom and she came up to the house with me. The rest of them were all huddled in the driveway,” said Ross.

“At first, I was the only one there other than the bus driver. I told him that they were welcome to come up to the house. I gave the bus driver my credentials. I gave him my background and my husband’s background hoping that would help get the kids off the bus, but the bus barn said no, they have to stay on the bus.”

Ross approached the bus driver after witnessing the bus roll backward down the hill from her living room window. “It must have been around 7:25 when he (the bus driver) came creeping up the hill, not making much progress. I was standing here at the window, watching. And suddenly he lost traction. The wheels were still going around when it started sliding backward. Next thing I know, I was looking at the headlights and the bus was hanging over the bank.”

She called the police immediately after the bus had slid off the road. “I called the state police right then and there,” she said. As soon as she got off the phone, Ross walked down to the bus. The road was so icy that she slipped and fell to the ground. “It was slippery!” she said. Still, Ross was more concerned about the children, who were stuck on a bus that looked bound to slide.

GET THE KIDS OFF THE BUS!

After hearing Ross give her name and background along with her husband’s name and background, the bus driver relayed that information along with Ross’ plea to get the kids off the bus to the bus barn. “When the bus barn came back with a no, I said, ‘Tell them two-thirds of the bus is hanging over an embankment and if the bus slides it’s gonna drop another 20 to 30 feet.’” Still, no action to evacuate the kids was taken until former firefighters Zack and Neal Mostov, the father and grandfather of two kids on the bus, showed up.

“At that point, one of the Mostovs showed up, and he just abruptly interrupted our conversation and took over. I backed off. Then the grandfather came and they took over the situation. I figured, ‘OK, you guys go do your job. When the kids got off the bus, they’ll meet me in my driveway,’” said Ross.

According to Ross, the Mostovs told the bus driver the same thing she had told him: to get the kids off the bus now. “And then it was like, ‘OK,’ and the kids started getting off the bus,” said Ross.

One of the kids recognized Ross immediately. “Oh, it’s Mrs. Ross!” he said. In fact, many of the children recognized her from her 15-year teaching stint at Moretown Elementary School. Ross waited with the kids in her driveway as the Mostovs started shuttling kids up the hill to where they were supposed to be.

“While we were waiting, I talked to the kids to see if they had any injuries. Everybody was fine. But they were clearly upset and nervous about the whole thing. We just waited there until decisions were made about what they were going to do with these kids,” said Ross.

Like many others, Ross wants to know why the bus barn didn’t delay the buses that day. “They could’ve delayed two hours at least,” she said. “And I hope that the bus driver is OK. I hope he doesn’t lose his job over this. He was a hero. He kept the kids calm. This wasn’t his fault. They should’ve delayed until the roads were cleared.”

After the accident, The Valley Reporter learned that Moretown road foreman Martin Cameron had taken the unusual step of calling the local bus barn to warn them that the roads were extremely slippery. The bus barn, First Student, sent the buses out on the regular schedule.

First Student has declined to make a statement regarding this incident. The Valley Reporter is currently waiting for a response to two calls to the First Student media hotlin