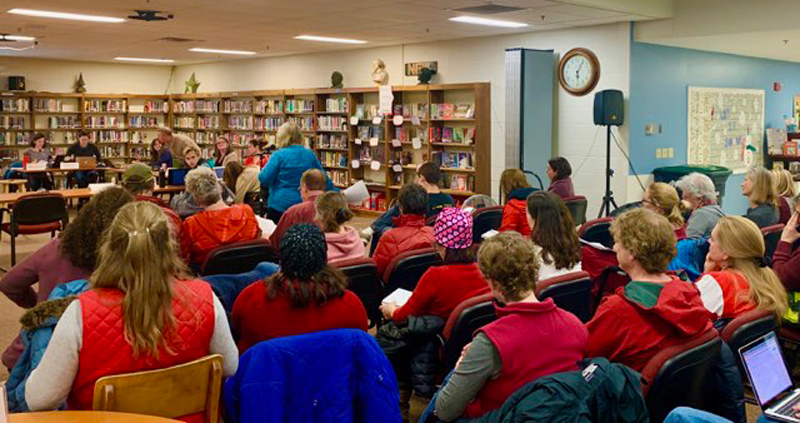 “Red for Ed” was the theme of last night’s, February 12, school board meeting. Community members flooded the Harwood library dressed in red to show support for the school district’s educators, some of whom may lose their jobs under the guidelines of a new budget proposed by the Harwood Unified Union School District Board on January 15. This budget, which calls for the consolidation of middle school students at Crossett Brook Middle School, will achieve its savings in part from staff cuts.

“The way the contract works based upon the RIFs (reductions in force) is that when you take out teachers, you take out those that are lowest in seniority,” explained Greg Shepler, a social studies teacher at Harwood. “Even though the line item says you are reducing one team of four teachers, those who are lowest on the seniority system are the high school teachers.”

With this ripple effect in mind, the teachers went on to report their concerns about how the staff cuts would affect student education and programming. They argued that the staff cuts proposed in this budget would “dismantle the alternative education program,” “weaken the high school humanities program,” “diminish the STEM program,” deem legally mandated services for students “untenable” and “diminish Harwood’s digital media program.” Unclear impacts on the high school that teachers cited include the possible reduction of a physical education teacher (which means one PE teacher for 450 students) and a 28 percent cut to the world language program with the elimination of a Latin teacher.

“As teachers, we are the first to feel the pain,” said Rand, referring to the pain inflicted by budget cuts. Rand argued that staff cuts should be made to administrative positions as well in order to lessen the blow on teachers. “We are an academic institution. To cut academic programs should be the last thing we’re thinking about. We know that we need administrators, but everyone should feel the pain, not just those of us at the front line.”

Members of the school board and administration reacted by assuring the public that these staff cuts were not as dire as the HUEA made them appear to be.

She explained that staff cuts wouldn’t imply a loss of programming in the high school but simply a replacement of teachers.

“The program will still exist, but it will be taught by new teachers. There will be a reassignment of teachers into the high school. You can say the reassignment is not desirable, but it’s not a cut,” said Nease.

For the core teacher positions (English, history, science and math), staff from the middle school will move up to fill them.

As for the art, physical education and language positions, board members emphasized that the cuts to these positions are still unclear. “I understand what you’re saying, but know that those decisions haven’t fully been made yet,” said Caitlin Hollister, school board chair. “While some of this is likely, none of this is finalized. Especially when it comes to courses that won’t be offered, that decision hasn’t been made,” Hollister said, emphasizing that the cuts presented in this presentation were not definite by any means.

After hearing the teachers’ concerns, the board made an explicit effort to collaborate. “Do you have any requests of the board for what the board could do in the intervening time between now and Town Meeting?” asked Maureen McCracken, Waterbury board representative. The teachers’ desires were clear: They asked that the board give the administration “a clear directive that collaboration with teachers is needed going forward, and that part of this collaboration should involve looking at budget savings outside of RIFs.”

Ultimately, the board passed two motions aimed at increasing teacher involvement in the middle school consolidation process. First, the board voted to direct the administration to support a collaborative transitional team, including staff, that will convene and meet regularly to discuss staffing issues. Second, the board voted to add to the 2/19/20 agenda the consideration a motion regarding a collaborative staff-admin committee that is tasked with reviewing cost-saving alternatives to cutting student-facing positions after town meeting on March 3, 2020. The later motion, while not voted on yet, will be presented and voted on at the next school board meeting.