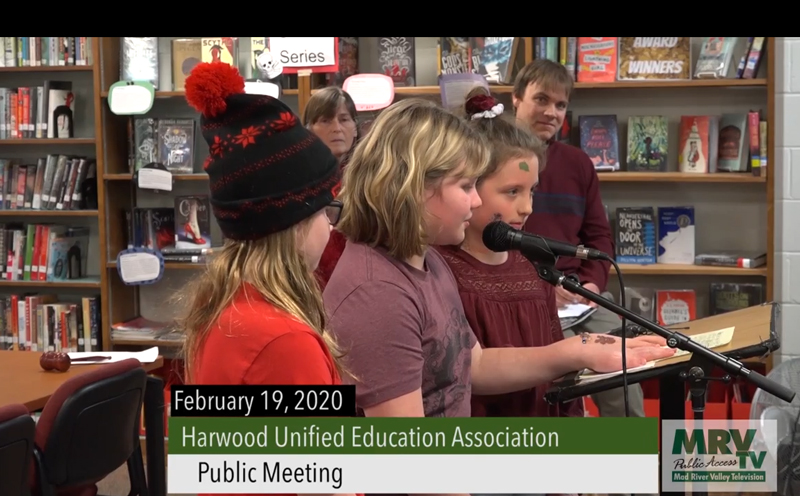 The Harwood Unified Union School District (HUUSD) Board canceled its last meeting before the school budget vote on March 3. Still, the public showed up anyway. With no board members at the table that Wednesday night, February 19, teachers and community members faced the audience as they took turns at the mic, voicing their concerns about the freshly released teacher reduction in force (RIF) and reassignment notices that are expected to cut or reassign nearly 50 teachers in the HUUSD if the budget is approved.

“The one thing you don’t want in a community is to have a priority based upon a number and a sheet and a piece of paper, rather than a person in the room,” said Harwood teacher Alex Rawson in protest to the “senseless bureaucracy” obliging seniority-based RIFs. “The bureaucracy is such that they say, ‘I’m sorry, but it’s not about how passionate the teachers are; it’s simply lowest on the totem pole,” said Rawson.

According to Page 9 of the master contract between the Harwood Unified Union School District and the Harwood Unified Education Association, the criteria for the selection of teachers to be laid off in the event of a reduction in force “will be seniority within any licensure and/or endorsement under which they have been employed within the District.” In other words: last hired, first fired.

“I’m voting against this budget because… it’s the only way I can say that combining these two middle schools right now, it’s wrong,” said Sarah Page, retired Harwood teacher. Page believes that teachers cannot simply be moved to new classes. “We’re seeing reshuffling of faculty members into positions that they’re not as suited for as the ones they were hired to do, and that’s not good,” said Page.

One Harwood senior outlined the reassignment dilemma in regard to Harwood’s digital media program: “Everybody in this room can manage to draw something on paper, but digital arts skills and knowledge take a lot of practice. … How can we expect someone who hasn’t had the experience and practice to teach it?” said the student, referring to the fact that under these proposed RIFs, the Harwood Union High School digital media teacher would be replaced with another art teacher from The Valley elementary schools, one without a digital media background.

Moreover, Harwood teacher Dana MacDonald argued that seniority-based cuts would eliminate Harwood’s most talented faculty members. Under the proposed RIFs, English teacher Paul Kramer, who has dedicated his Harwood career to creating a supportive learning environment in the special education HCLC program at Harwood, would be cut. “When you find someone who chooses to invest in program development, academic curriculum development, and is willing to do all of this with a struggling population, you keep them. Cutting Paul is an injustice to the many students who need a program like HCLC and a teacher like Paul. There has to be another way.”

Despite the palpable outrage in many of the public’s comments, not all spoke in disdain of the recent RIF notices. In fact, one Harwood student, Carlton Cummiskey, student representative to the school board, cautioned the audience to “keep the facts straight.” Cummiskey reminded the audience that “when the board originally started looking at budget options, there was a very harsh reality. Keeping the budget the same would cause just under a 10 percent increase in some towns, so the board looked for other options to keep the budget at a minimal, manageable increase.”

Cummiskey, who has been to nearly every school board meeting, emphasized that the current budget was the most cost-effective, pro-programming budget that the school board had seen. Other budget options proposed cutting many programs, including the hearing project, a professional development program for teachers, a wellness center program, world language for pre-K to fourth grade, and chorus and band for fifth- through seventh-graders.

“When the board saw these options, they obviously turned them down because nobody wants to cut such valuable programming. So, they looked for other options to save the same amount of money but without the same loss in programming,” said Cummiskey. “This budget achieved the board’s goal of only a 2.2 percent increase in the budget while theoretically having no programming loss at Harwood Union High School and having more programming for the HUMS students since they would now gain access to programs like sustainability, which they did not have before,” said Cummiskey. “Yes, this budget cuts teachers, but it is still not the budget with the most teacher cuts. And it’s important that we make sure that everybody knows it is teachers being cut, not positions.”

For people like Chris Viens on the other hand, this budget is the best-case scenario in terms of ensuring a manageable tax rate. “There is a wage disparity between the people that grew up here and the people that come up here. When they’re faced with an increase of 4 cents, 6 cents, 8 cents, for them that’s nothing. But for the people who have struggled here all their lives, that’s destructive,” said Viens, Waterbury Select Board chair and lifetime Valley resident. “You’re blaming a board that in my opinion is dealing with a huge financial mess and is bringing stability to people that are having a difficult time affording living here. And then you turn around and go on strike because you didn’t get your way?”