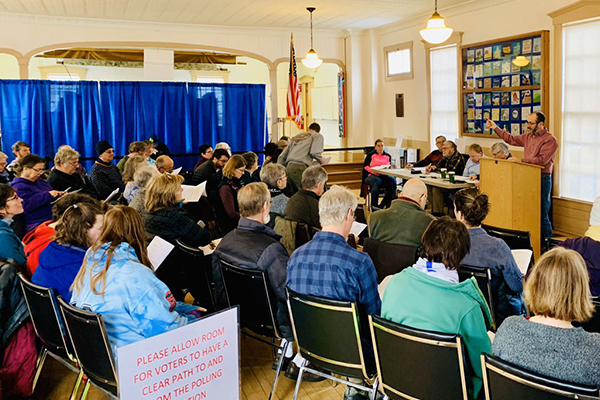 In Moretown, voters passed the town budget of $1,259,989.86. They also approved the expenditure of $160,000 to purchase an excavator to maintain town highways.

In a two-way race for one seat on the Harwood Unified Union School District Board representing Moretown, Lisa Mason received 472 votes and Chris Noyes received 169 votes. They were vying for Gabe Gilman’s seat.

On the floor, there was no contentious discussion over the town budget. “Somebody’s gotta have a question!” said the moderator when the room fell silent during the budget discussion period.

The Mad River Valley Ambulance Service did not receive $15,000 from Moretown because Moretown did not have a vote on the ambulance fund as other towns did. “Due to a clerical error, this article wasn’t introduced in time to be voted on today, but during discussion last night it was suggested that perhaps we can vote later in the year to make this up or look to make an article for this next year,” said MRVAS representative John Summers at the meeting.

“What we’re doing is trail maintenance and property maintenance for trails behind the school as well as adding signage. We are applying for a grant to introduce a skills park, which includes obstacles and play stuff for bikes and skis,” said the rec committee representative. Additionally, the rec committee plans general maintenance of tennis courts and recreation fields in Moretown.

The Washington County Diversion Program will receive a sum of $350 from the town in 2020. At the meeting, a prosecutor spoke to support the program. “This program allows first-time or petty offenders to go through a different system. I support this program,” said the prosecutor. A man spoke up to share his personal experience with the program. “Years ago, a rascal cracked my windshield at Spaulding High School. He did reparative justice work through the program. He did community service and wrote a letter of apology. They do a nice job,” the voter said.

The Central Vermont Home Health and Hospice organization was awarded $3,750 from Moretown voters. Last year, Moretown voters allocated only $500 to the organization after one voter shared a bad experience he had with CVHHH. However, this year, that same man, was present and spoke fondly of their work. “They responded well to me. A lot of corrections have been made. I’m in favor of supporting current cost. I’m happy at this point. They really did listen and are a good organization,” he said. Another voter spoke at the meeting to express approval for the 2020 allocation amount. “I’m here to tell you that the care that this agency offers is better than anything you can get on the market. It cuts down on hospital costs and it’s convenient for the patient,” he said.

School board representative Gabe Gilman and Kristen Rodgers spoke to answer voters’ questions about the school budget and the merger. “What will happen to the empty classrooms at Harwood Middle School?” asked one man. “We don’t know,” responded Gilman. “What is your argument to say yes or no on the budget?” asked another voter. “It’s a personal choice,” said Gilman. “A no vote contains no instruction. It’s less risky to send the board back to the drawing board.” Gilman also told voters that he thought reconfiguration of the schools through a budget plan was inappropriate. “The appropriate way is to present the project and then ask for the funding,” said Gilman.

Mad River Valley Television will receive $750 from Moretown in 2020. “Being able to watch school board meetings and select board meetings is incredibly important. Thank you, MRVTV,” said a voter at the meeting.

Green Up Vermont will receive $200 instead of the original $100 asked of voters in the Town Meeting report. Voters agreed to amend Article 30 and increase the Green Up Vermont allocation. “Green Up Day should be every day,” said one voter at the meeting.

At the end of the meeting, state Representative Kari Dolan told voters about her work at the State House, including her advocacy for the hermit thrush for state bird bill that seeks to protect birds at the state level. “We’ve lost 2.9 billion birds since 1970,” said Dolan.

State Representative Maxine Grad spoke about the Comprehensive Cannabis Regulatory System Act S.54 that just passed the House. “I am hopeful that from a consumer safety standpoint that we can have a regulated market,” said Grad.

The Moretown Select Board has yet to decide where next year’s Town Meeting will be held. There is concern that with limited parking and a stair-based entrance to the voting stage, the Moretown Town Hall is not handicap accessible.