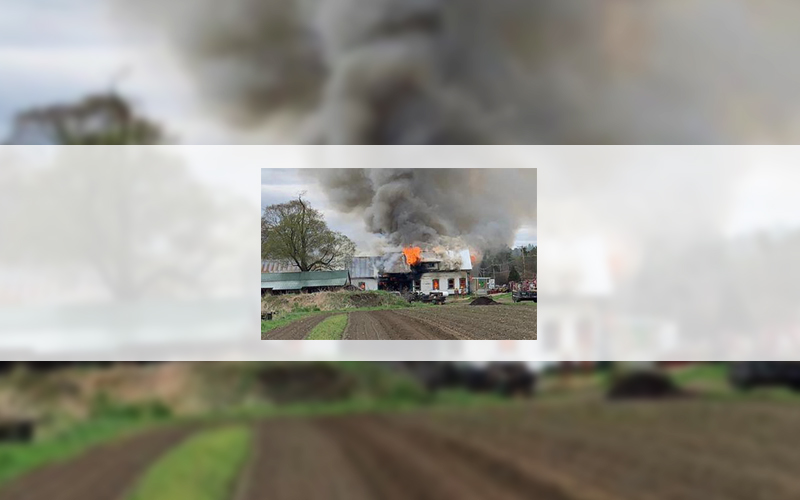 An electrical fire on the first floor of Hadley Gaylord’s farmhouse on Route 100 in Waitsfield resulted in a four-alarm fire that destroyed the house and damaged the barn.

The occupants of the house, Brian LaFrance, Erica Blake and their 6-month-old infant, were awakened by fire alarms going off on the first floor on Sunday morning, May 17, and called to report the fire at 9:24 a.m., according to Vermont State Police fire investigators Tim Angell and Steve Otis. Shortly after they called to report the fire, the fire spread through the building.

Gaylord has livestock in the barn attached to that house and the chickens, sows and piglets were safely removed from the barn.

Firefighters from the Waitsfield-Fayston Fire Department arrived and found smoke and fire on the first floor which quickly spread to the rest of the house. Firefighters from Warren, Moretown and Waterbury responded along with the Mad River Valley Ambulance Service.

Waitsfield-Fayston fire chief Tripp Johnson requested assistance from the Department of Public Safety Fire and Explosion Investigation Unit to determine the area of origin and the cause of the fire. Investigators from the unit arrived on scene this morning and determined that the fire started in a small room on the first floor. The cause will be listed as electrical and is not considered suspicious.

“The home had working smoke and CO alarms. The occupant had just replaced the old nonfunctioning smoke detectors with new ones within the past month. This played a significant role in early notification for the occupants who were able to safely exit the building,” the investigators wrote. More information on smoke and CO detectors and their proper placement can be found on the Division of Fire Safety’s website: www.firesafety.vermont.gov.

Gaylord said his farm stand was not damaged by the fire. He said that he had had seeds stored in the barn and those were destroyed by the fire.

The Big Picture Theater in Waitsfield hosted its second drive-in movie event on May 19 as a fundraiser for the Gaylord farm which raised between $3,000 and $4,000. See details at www.bigpictureorderonline.com/. Additionally, the Big Picture will host a second drive-in movie as a fundraiser on Saturday, May 23, when “The Bad News Bears” will be shown. Organizers hope to raise an additional $1,000 for the Gaylord farm.

There are other digital fundraisers underway to help the tenants and the Gaylord farm.