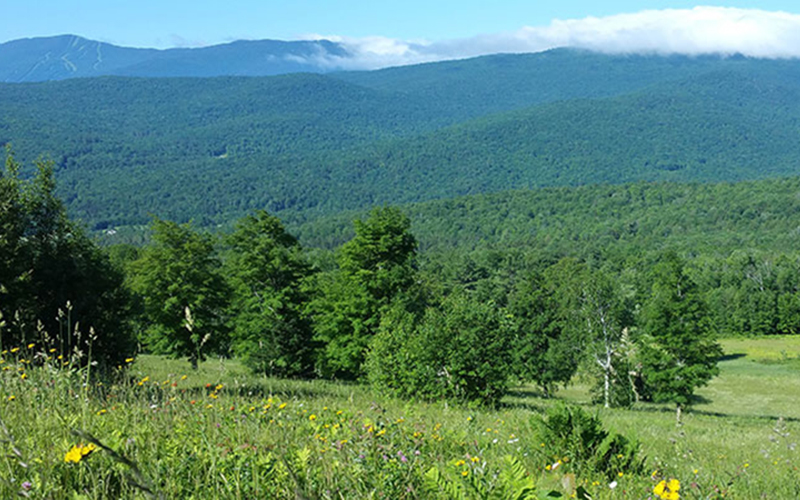 When Robert Newis was looking for land to buy in the early 1980s, he reached out to the late Reba Hall, longtime Fayston town clerk and a Realtor.

“I asked Reba to show me some of the prettiest land in the town. She brought me up there,” Newis said, referring to what is now a 91-acre high-elevation public town forest in Fayston that he bought in September 1981 from Ted Boyce.

Kristina Castegren, who purchased it from Newis in 2013, donated the land to the town last year. The land rises from about 1,500 feet to 1,900 feet and features sweeping views to the west, south and east.

“After I bought the land, I started working on it. I had a lot of local guys help me clear the land. I spent hours and hours working it. We had a bulldozer and front-end loader,” Newis said.

Newis, a commercial Realtor from Massachusetts, had been coming to Vermont for years before he purchased the land and began developing it with a plan to subdivide it. In addition to clearing 75 acres of the land, he put about 4,000 feet of road on the property, built a 400-by-175-foot pond, and between 1998 and 2000 went through the permitting process to create a seven-lot subdivision with 20 shared acres plus the pond. Near the pond is an old cellar hole, thought to be from the original settlers of the property, the Risleys.

“I’d heard that this was one of the more productive farms in Fayston. I’m not sure if it was a sheep or dairy operation,” Newis said.

The provenance of the cellar hole and the original settlers of the property are the subject of research being conducted by both the Fayston Conservation Commission and the Boyce Hill Town Forest steering committee.

Despite the spectacular, sweeping views on the property, Newis found little market for the lots and sold it to Castegren.

After investing so much of his own energy and resources into the land, selling it, he said, “was like cutting off my arm.”

Subsequently, Castegren sought to reduce the number of developable lots from seven to four, but met opposition from the closest neighbors on Boyce Hill Road. The town approved the change and it was challenged in court where ultimately the court ruled in Castegren’s favor.

She opted not to develop four lots or even one lot for herself and in 2019 announced plans to donate it, through the Vermont Land Trust, to the town.

“We’re in the process of finding out the long-term history of the land and who had it in the 1800-1900s,” said Lisa Koitzsch, chair of the Fayston Conservation Commission.

Koitzsch and conservation commissioner Corrie Miller are among those working on an interim and long-term management plan for the property. This year the commission is working on an inventory of the parcel that includes its natural resources as well as its history.

“One of our jobs in this first year is to learn that history. We’re researching the deeds and historic agricultural census data. We’re working on getting some oral histories,” Miller said.

They note that the extensive stone walls on the property are likely from when the land was the Risley farm.

After this initial year of assessing the property, the Fayston Conservation Commission will reach out to the community for public input on a long-term management plan. This spring the select board agreed to limited mowing on the land to keep some portions of it open.

The conservation commission is seeking a few people to join the Boyce Hill Town Forest steering committee. Those interested can email This email address is being protected from spambots. You need JavaScript enabled to view it..