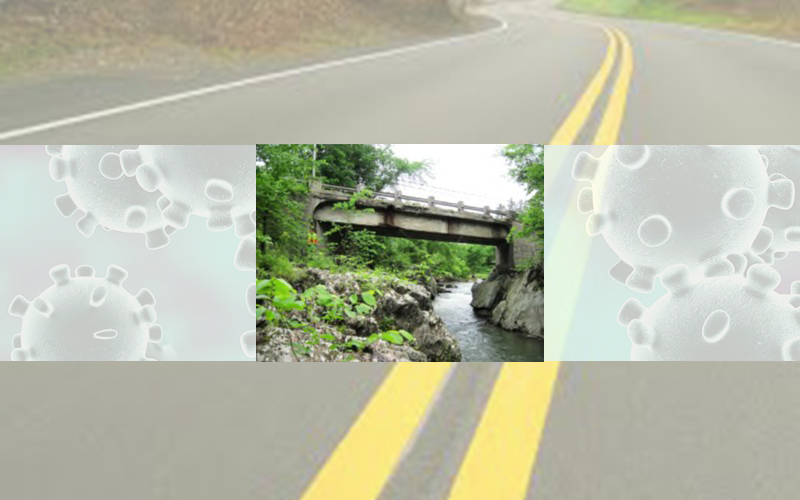 (Editor’s Note: An earlier version of this story incorrectly reported the date of Route 100B closure as June 22 due to inaccurate information on the VTrans website. Project spokesperson Jennifer Zorn said the website was being updated on June 19.)

The long-awaited replacement of a 1928 bridge on Route 100B on the Mad River in Moretown will start August 17 with a 60-day closure of the road at the south end of Moretown Village.

Site prep work will begin August 3 and the bridge will remain open until it closes on August 17. The road and bridge are slated to reopen October 17 with work fully completed in November.

The $2.5 million project is a hybrid of precast and onsite construction. Its completion will mark the end of three-plus years of the bridge being a single-lane controlled via a traffic light.

The new bridge will be a single-span bridge that is 10-feet long and 30-feet wide. It will have a 100-foot length with a 30-degree skew that meets hydraulic standards. The rail-to-rail width of 30 feet will also meet the current design standards and accommodate bicycle and pedestrian traffic. The new superstructure will consist of five tangent steel plate girders with a bare concrete deck. The substructure will be founded on bedrock.

Moretown and Waitsfield have received funds from VTrans to offset wear and tear on the local town dirt roads during the 61-day closure. Stevens Brook runs through both Duxbury and Moretown.

The 92-year-old bridge is in rough shape with heavily damaged curbs and it is losing connections with the ledge/bedrock it’s on. The newly proposed structure will have a concrete deck on steel girders, spread footings on ledge and will be longer, with an increased width and safer alignment.  The new bridge will be wider and higher which will give the Mad River more room during high water events. The existing bridge incurred significant damage during Tropical Storm Irene in 2011.

VTrans evaluated alternatives for bridge replacement in an engineering study completed on August 30, 2016. The study addressed the proposed design criteria for bridge and roadway alignment, horizontal and vertical geometrics, hydraulic adequacy, historical and archaeological resources and environmental impacts. Several alternatives were considered including no action, maintenance and repair, and full bridge replacement. Due to the functional deficiency of the bridge, the deterioration of the superstructure and the deck and the inadequacy of the roadway geometry, the final decision is to replace the entire bridge with a new bridge on a slightly modified alignment.