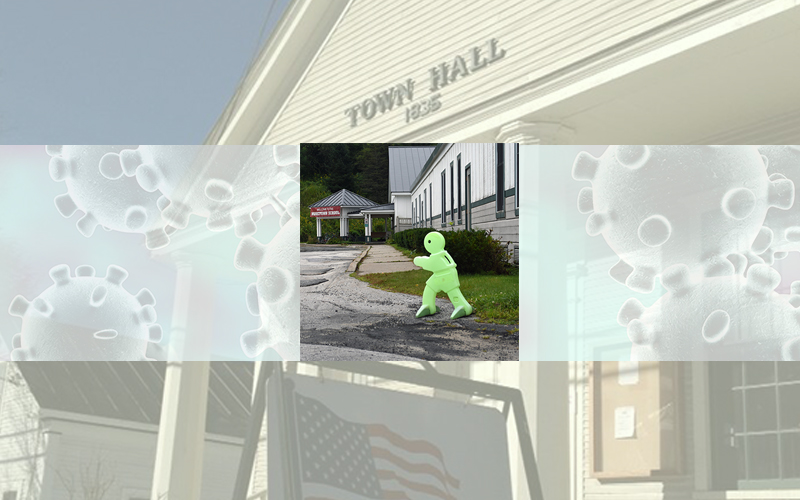 The constable appointment came first. Select board members appointed Tom Chenette, a Burlington police officer and detective with 15 years of experience. Chenette holds a degree in psychology from Castleton University.

In Burlington, Chenette works in the major crimes division, which involves homicide, arson and other violent crimes.

When asked about his motivations for applying for the constable position, Chenette said, “It’s a good way for me to give back to the community that also fits my schedule.”

After appointing Chenette and making a few other reappointments (members reappointed Paula Woods to her alternate DRB position and Karen Horn to her planning commission position), the board moved onto a discussion about withdrawing from the school district.

The board invited Moretown resident Neil Nussbaum, who has been spearheading the movement to withdraw from the Harwood Unified Union School District (HUUSD), to speak.

“I wanted to come back and see if there were any thought about moving forward on this given the pandemic,” he said. Like he’s done at previous meetings, Nussbaum explained the complicated process involved in withdrawing from the district.

The board acknowledged that if the school budget passed on June 16, the timeline for hosting a vote would be less dire, since Moretown would not be losing its fifth- and sixth-grade students to a middle school merger this fall. That said, the board also acknowledged that the HUUSD Board is still looking into merging middle school students at Crossett Brook Middle School (CBMS) for 2021, so withdrawal from the district still needs to be investigated if Moretowners want to keep Moretown school intact.

Thus, the board decided to invite its two school board representatives to its July 6 meeting to give the board some perspective on the decision to withdraw.

“I’d like to see the Moretown school stay intact. But we have a lot of work to do as far as breaking away from the district and figuring out what’s going to happen with our students,” said select board member Rae Washburn. “I don’t see a vote this year unless somebody does a lot of research. I wouldn’t be comfortable voting on something without seeing the total costs. It seems like it would be very expensive to pull out of the district.”

To this, Nussbaum said he would continue to do research on school district withdrawal for the board. As for the board’s responsibilities, members agreed to pursue collecting input from townspeople regarding a potential vote to withdraw.