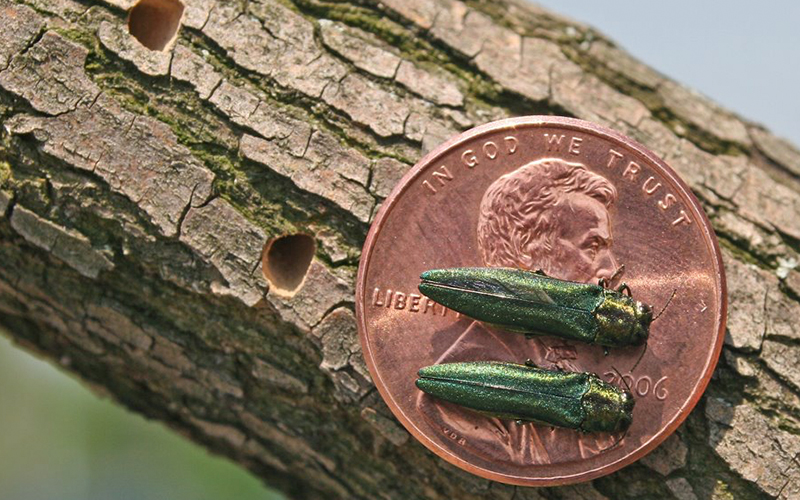 Ash trees are in trouble. The destructive insect, emerald ash borer (EAB), which feeds on all species of true ash, has been sighted in Washington County and is likely spreading this way. There is a glimmer of hope, however, and it comes in the form of “trees helping trees.”

EAB is an invasive beetle that kills ash trees. It is metallic green and one-half inch long.  It was first discovered in Detroit, Michigan, in 2002, thought to have been transported in shipping materials from its native countries of China, Eastern Russia, Korea and Japan.

EAB causes damage when the grub-like larvae bore through the inner bark and outer wood. The serpentine patterns they create in the wood under the bark, called galleries, cut off the flow of water and nutrients to the tree. When the larvae pupate into adult beetles, they emerge from the tree leaving D-shaped exit holes. The beetles fly and feed on the leaves. They mate, the females lay eggs in the crevices of the bark, and when the eggs hatch, they go directly into the tree to start a new life cycle, feeding as larvae.

In 2018, EAB was found in Vermont, thought to have been transported by firewood from an infested location. Starting in Orange County, it has moved into Washington County and has been sighted as close to us as Middlesex. We are expecting it to spread into The Valley and are on the lookout for signs of infestation. When it first arrives in an area, it might not be obvious, but within a few years, the population growth increases and leads to widespread ash decline and mortality.

When ash trees die from EAB damage, they become very brittle. Once dead, they are hazardous and very dangerous for loggers, power companies, tree crews and recreationalists who spend time in the woods.

Woodpecker presence and their damage to live ash trees may be the first sign that a tree is infested. They scrape off outer bark looking for the larvae, leaving irregular holes and smooth, light colored patches called “blonding.” If the bark is removed, S-shaped galleries weaving back and forth may be visible in the wood.

The D-shaped exit holes are good EAB indicators, but are only one-quarter-inch long and are difficult to see. Other signs include crown dieback, splitting bark and epicormic shoots growing from the trunk of the tree.

Management plans for properties with many ash trees may be a consideration. Start by assessing the property to identify the ash trees to see what can or should be done over the course of a few years. There are other reasons ash can display symptoms similar to EAB, like from drought stress or from the disease ash yellows, so any currently hazardous or dying ash trees close to or leaning toward structures or wires should be removed first.

Here’s the good news. Some trees can be protected from EAB and may be saved by using a plant-derived pesticide called Azardirachtin, which comes from the seeds of the neem tree from India. This product is injected into the tree in late spring or throughout summer, taken up systemically by transpiration into all parts of the wood and leaves. Azadirachtin works in two ways. First, it is a feeding inhibitor, so the insects lose their appetite and stop eating leaves and wood. Second, they become sterile, so the adult beetles’ eggs are not viable and larvae do not complete development.

Live trees can be harvested and the wood can be used for lumber and firewood, but first check the “Recommendations to Slow the Spread of Emerald Ash Borer.” Remember, moving firewood is the number one cause of EAB spread.

Ruseckas is a ISA-Certified Arborist NE-7190A and a Vermont Certified Pesticide Applicator 1168-4306.