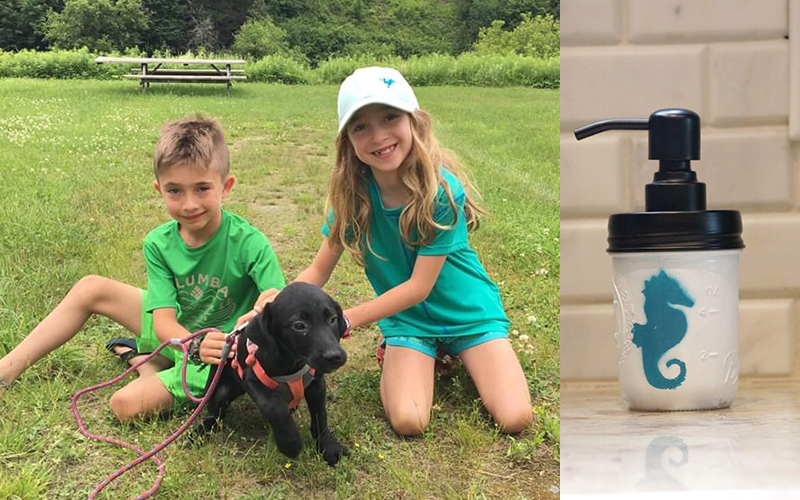 “A couple years ago, when we first got this house, our dad made some soap bottles. During quarantine we thought they would be fun to sell and make,” said Spencer Lutsky during a FaceTime interview with The Valley Reporter.

To make the dispensers, the twins order parts separately and assemble them when they arrive. The body of dispensers are made of Ball mason jars, which the twins spray paint with a variety of unique designs: hearts, chairlifts, palm trees, lobsters and more. “You can also order a custom design,” said Spencer. The twins take inquiries on their Facebook and Instagram accounts and ship or deliver orders depending on the location.

However, for Spencer and Mirah making soap dispensers is more than just a fun quarantine project. There’s also a philanthropic component to the business related to a special event that transpired just over a year ago.

On a summer day in late June 2019, Spencer and Mirah’s parents, Marci and Kevin, took them on a trip to the Middlesex Fire Department, where they had arranged to meet a Front Porch Forum buyer to sell a pair of skis. But when they arrived at the fire station, Marci and Kevin didn’t take the skis out of the car. Instead, Kevin gave the twins a new dog harness. That’s when the twins realized what was really happening: They were adopting a puppy.

“I was so excited both my flip flops fell off!” said Spencer about his experience running to pick up Cam, their new lab-spaniel mix puppy, who was transported to Vermont through the local dog rescue organization For the Love of Dogs Vermont.

Now, the twins donate a dollar of each Adventure Twins order to the local rescue in hopes of helping other dogs like Cam. When Spencer and Mariah adopted Cam, they realized there were a lot of abandoned dogs that needed homes and medical attention. “So, we decided to raise money to help the dogs,” said Spencer.

The twins also have plans for what they’ll buy with the money they raise for themselves. “I’m going to buy a new skateboard!” said Spencer. “Maybe I’ll buy more yarn,” said Mirah, who likes to knit. “I had a knitting teacher who would come over to our house and we would knit together. I like to knit hats,” she said.

Just over a month into launching Adventure Twins, Spencer and Mirah have learned about starting a business, including the challenge of working with family. “We fight a lot! We fight over things that shouldn’t even be fought about!” said Spencer.

Still, their soap dispenser project has been fun and worthwhile. “I like to see how they turn out,” said Mirah.

Until the next batch is due for delivery, the twins will be outside enjoying the Vermont summer. “We like to hike and bike,” said Mirah. When asked why they decided to call their soap dispenser business “Adventure Twins” the twins responded, candidly, “Because we’re twins and we love to adventure!”

See more pictures from the Adventure Twins on their Instagram page at adventuretwinsvt.