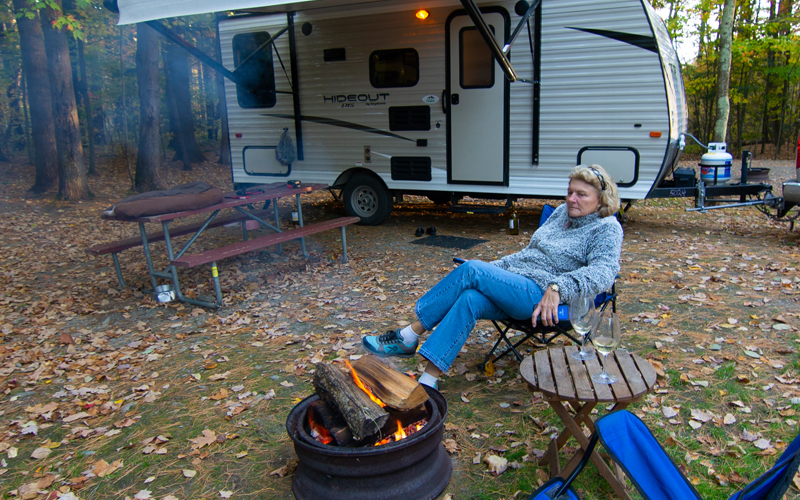 The leaves are falling and nights are getting colder and many Valley residents are preparing to make the trek to warmer climates, a trip they made last spring at the peak of COVID-19.

Many others (and some of those same snowbirds) are investing in recreation vehicles and campers to give them a way to safely vacation as well as travel south for the winter.

Here’s what a few local folks had to say about it.

Sandy Macys and Deb Slinn live high on a hill in Fayston when it’s warm in Vermont. For most of the last decade they’ve wintered in Florida and ultimately bought a home there. Their commute back and forth in the spring and fall was uneventful until last spring.

As COVID cases grew, they watched from their home in Rotunda West, which is near Englewood, Florida, about an hour south of Sarasota and an hour north of Fort Myers.

“We stayed away from people as much as possible. When it was time to come home I slept in my truck,” said Macys.

He and Slinn travel back and forth in two vehicles with Slinn transporting their two dogs. Slinn continues to work as a court reporter when they’re in Florida.

Slinn stayed in a hotel or two on their way home, he said, and they drove full tilt, many hours a day to get back to Vermont this spring where they quarantined for two weeks.

With Florida and other parts of the country seeing increased cases of COVID, their strategic plan for returning to the south this fall includes a 17-foott Keystone Hideout trailer that they can tow behind Macys’ full-size pickup.

Macys and Slinn took their trailer out on its maiden voyage over the weekend and are enamored with it. It has a full bath, shower and a big enough fridge that they can travel several days without stopping.

PLAY IT BY EAR

When they do go back to Florida this fall, they’re going to play it by ear.

“It’s normally very stressful and we drive long hours per day just to get there. Now it doesn’t matter. If we get tired, we can pull over at a campsite, or anywhere we can because the fridge is propane as well as electric,” Macys said.

Once they make it to Florida, they are very careful. They don’t go out much and if they do they’re masked up and 6 feet apart from other people.

Peter and Blaine Laskowski, Waitsfield, have been to the east coast of Florida for a dozen years or more. They’ve had a condo north of Vero Beach for 30 years.

“We’re planning to leave at the end of October. We’re somewhat hesitant this year with the higher infection rates in Florida. We’re heading with some trepidation. We find that people are lackadaisical about the virus,” Peter Laskowski said.

And because they’re not 100% certain that they’ll go this year. They put up extra firewood in case they don’t go or in case they return to Vermont earlier than planned.

“When we came back last May, we were concerned about stopping anywhere and just drove 24 hours straight through. We might do the same thing this fall or look for an out-of-the-way hotel in the Carolinas. We do enjoy going down through the Appalachians and used to want to stop and do a little sightseeing. But a couple of years ago, we cut the trip down to two 12-hour days of driving – until last spring when we drove straight through,” he added.

While they are traveling, they plan their stops carefully, paying only with credit cards and bringing a spray bottle of alcohol. They bring cold cuts and other things to eat along the way so that they don’t have to go inside of shops.

Once in Florida, they rely on masks and social distancing to handle grocery shopping and other necessary outings.

“If people aren’t wearing masks and rates continue to rise, we’ll think about leaving,” he said.

DIDN’T HAVE TO SHOP

Karl and Susan Klein, Fayston, aren’t snowbirds, although Karl wouldn’t mind traveling extensively in their airstream camper. A couple of years ago, he took a monthlong ramble in a 23-foot Airstream with Susan flying to New Mexico to join him for the return trip.

This summer, to balance their desire to have a vacation and travel safely, they upgraded their 23-foot trailer to a 27-foot rig. The old trailer had a smaller bed and bedroom and bathroom which was fine for a few weekends away each year. The new one has panorama windows at the back and the bedroom at the front.

They recently took their new camper on its maiden voyage to explore Michigan as well as its Upper Peninsula. They’d normally drive through Canada to get to Michigan but with the U.S./Canadian border closed, found themselves making the trek across upstate New York, Pennsylvania and Ohio.

“We were able to pack enough food for two weeks, so we really didn’t have to shop. As we were traveling, we were checking to see what county we were in and whether we felt secure stopping and interacting,” Klein said, the county reference being the number of COVID cases per 100,000 people in any given county.

The Kleins are members of Harvest Host, an. app that allows those camping and RVing to stop overnight for free (there are no hookups) with the recommendation that visitors make purchases when possible. They try to find vineyards that are Harvest Hosts and found one in northeast Pennsylvania where they stayed at a lovely vineyard with a view of Lake Erie.

Klein said that the wine there was very good.

For most of their trip west and then up the west coast of Michigan, they didn’t have to interact with any one. They only stopped for fuel and developed a protocol that had Karl get out with a credit card and mask and fuel the truck.  Susan opened the door and put hand sanitizer on his hands before he got back in the truck.

“A lot of people were camping, getting away for vacations. Everywhere we went people were socially distant and wearing masks, even with the Trump signs we saw on lawns,” Klein said.

They’re back in Fayston now and when interviewed this week, were just getting the camper cleared out for the winter and it will sit until next May.

“Over the winter, we’ll see how things develop. We really love Canada. It would be great to take a month if the border opens,” he added.