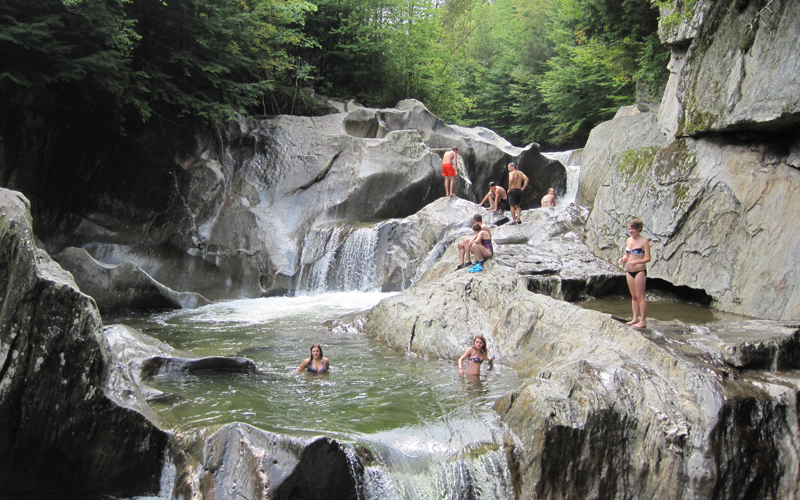 “What I say to my forest leadership team is that on any given weekend day it’s probably the busiest place in the national forest,” said Green Mountain National Forest district ranger Chris Mattrick at a Warren Select Board Meeting on October 13.

The place is Warren Falls, a swim hole in the Green Mountain National Forest that sees an increasing number of visitors each year. This year, the swim hole was particularly crowded. “The summer was incredibly busy,” said Mattrick. “People were everywhere. The parking lots were overflowing.”

Mattrick and his team tracked use of the falls over the course of the summer and determined that with the increased usage of the site, the town needs to rethink how people access it. “Parking continues to be the headache there to a great degree,” said Mattrick, who explained that people are blocking each other into the parking lot and parking cars dangerously on the side of the road. “We’re trying to do what we can to get a few more cars off the road,” he said.

Warren’s emergency management director Jeff Campbell attested to the parking problems. He described an instance over the summer in which a one-ton truck with an equipment trailer hit a caravan with a family inside while it was attempting to navigate through the illegally parked cars on the road. “How no one was hurt in that one crash, I honestly don’t know,” said Campbell. “They must have had $5,000 to $10,000 of damage to the vehicle.”

Campbell has asked Warren Falls users to move their cars before, to no avail. Once, Campbell asked a man to move his car off the road, stating, “You need to move your vehicle because you are in a travel lane and the sign says no parking.” However, the man argued that, if other cars were parked there, he should be allowed to stay. “It continues to get worse and worse year after year,” said Campbell, who once counted 67 cars parked on the road at once. “I don’t know how we limit it. Something needs to happen.”

Additionally, this summer, Mattrick noticed more trash than usual. “That user group is not necessarily the most mindful of pack it in, pack it out,” he said. Mattrick and his team are considering installing a trash disposal service and portable toilets at the site, especially after noticing clumps of toilet paper scattered near the falls.

“People are using the site as a bathroom,” said Mattrick. “We realize that people probably pee in the river. We’re going to stage a portable up there but we’re not quite sure where we’re going to put it because we don’t want it to be a roadside attraction. We want it to be for the users of that area.”

Finally, the site is facing environmental strain. “The walkway system is experiencing resource impact, primarily when you get down to the end where people want to just walk off the end instead of following the trail,” said Mattrick, who said the forest service plans to set aside money for pathway redefinition, which involves fencing off portions of vegetated land. “We will put a fence in at the end and reconstruct the path down to the falls,” said Mattrick.

Possible solutions to the overcrowding problems at Warren Falls include, as Mattrick pointed out, ticketing and towing cars parked on the road, increasing parking space and creating a shuttle that will bring people directly to the falls by bus. However, Mattrick also worries that the environmental strain on the site will be greater if the town accommodates the site for more people. "Does it help the site to introduce more and more people?” he asked.

Going forward, the Warren Select Board and Mattrick will work together to brainstorm ways to handle overcrowding at Warren Falls. Select board member Randy Graves vouched for environmentally sustainable solutions. “Sometimes we have to protect the environment from ourselves,” he said.