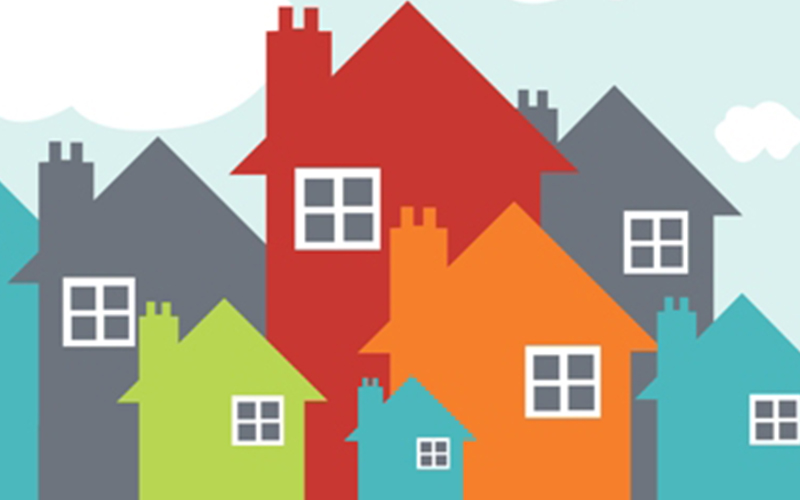 As with many things related to the year 2020, the real estate market was like a tale of two cities, the pre-COVID market, and the COVID market. Realtors had to learn new ways to do business safely once the state allowed the showing of properties to resume. Video and virtual became the norm and many buyers moved forward with offers without ever setting a foot inside, or even traveling to Vermont to see what they were purchasing. Vermont was the safe haven for many city dwellers looking to get back outdoors, and the Mad River Valley, with a plethora of recreation opportunities, became the destination of choice for many. Adding to the pressure were low interest rates and fewer properties on the market resulting in a sellers’ market not to be rivaled in recent history -- if ever. 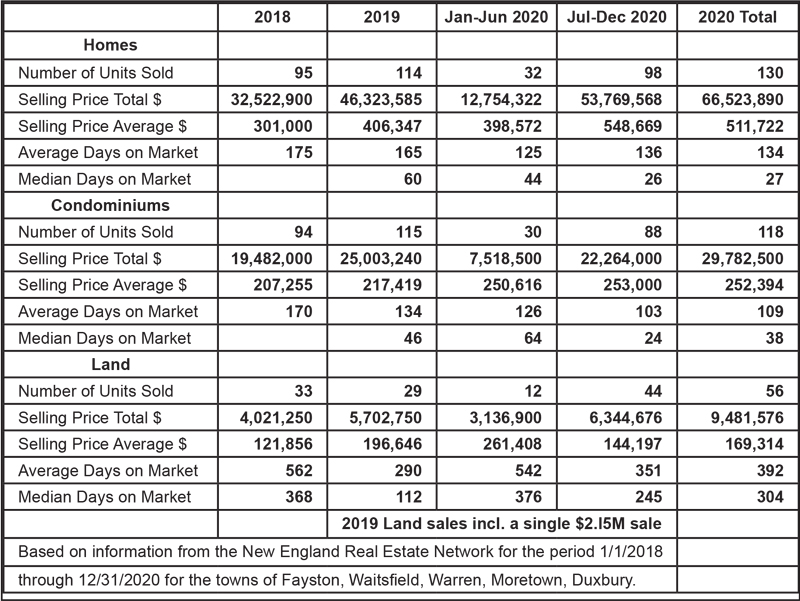 Many who ski the slopes of Sugarbush have seen the condos at South Village, just south of the resort and adjacent to the ski trails. These stand-alone homes range in size from about 1,500 square feet to about 2,400 square feet and have two to four bedrooms. In March we saw the sale of a three-bedroom, four-bath unit with 2,360 square feet sell for $388,500 having been listed for just over six months. In October the unit next door, a four-bedroom, four-bath with 1,900 square feet sold for $526,000 after being on the market for 34 days. A bit closer to the resort are the Snow Creek Condos. These two-bedroom units with recently renovated exteriors are all similar floor plans and are each about 1,050 square feet. The difference in units is their proximity to the slopes, quality of finishes and the floor level (first-, second- or third-floor level). In April a unit sold for $345,000 and in August another sold for $416,000.

Land sales in The Valley were no exception. As shown on the attached chart, the dollar volume of land sales doubled in the second half, the number of lots sold nearly quadrupled and the days on market decreased substantially. Realizing that over half of the dollar volume generated in the first half was from two parcels (both over 500 acres, and accounting for over $1.8 million of the sales volume) the difference is even more astonishing.

As of this writing, (January 19, 2020) there are 25 single-family homes for sale ranging in price from $149,000 for a trailer home in Duxbury, to a $3.495M estate in Warren. Eight of the homes are priced above $1M and another seven are above $500,000. There are 22 condominiums available, half of which are fractional ownership units at Clay Brook (ranging from a one-bedroom quarter share for $78,000 to a full ownership three-bedroom priced just over $1M). The other 11 condos currently on the market range in price from $135,000 for a Moretown Commons two- bedroom to a three-bedroom Club Sugarbush listed at $399,000.

Klein is the broker in charge at Sugarbush Real Estate’s Sugarbush office.