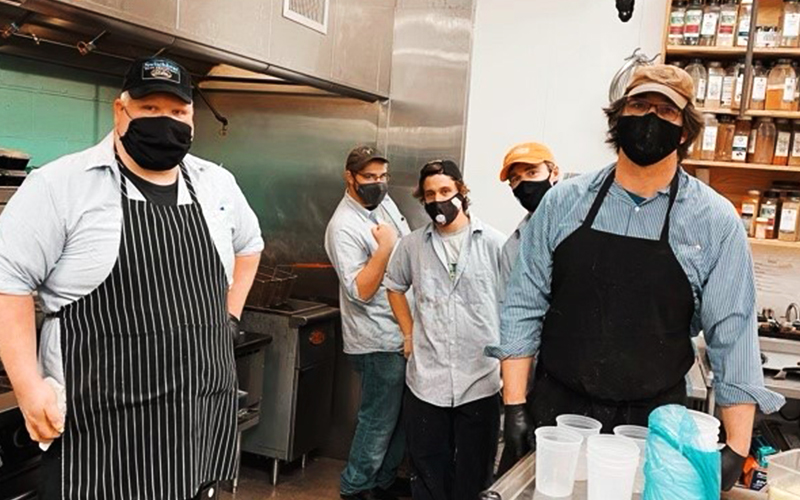 “It’s the best pantry in The Valley. It’s fun. For me it’s one of the best parts of the day,” reported Chris Harmon, a former executive chef who is now behind the deli counter at Mehuron’s and loving it, referring to his ability to leave the deli with a list and go ‘shopping’ anywhere in the store for the right ingredients.

Harmon is one of three former executive chefs currently employed at the deli of the Waitsfield supermarket. He and deli operations manager Patrick Garvin along with former chef Todd Dibkey and their co-workers handle the day-to-day demands of the deli including sandwiches, cold cuts, cold salads, soups, prepared dinners and more.

Anyone who shops there regularly has seen Harmon or one of his co-workers with a list and a basket by the produce, or seeking out some of the specialty foods that the store carries to create a special dish.

Harmon grew up on Sebago Lake in Maine where his interest in cooking developed because his mother worked a lot and he began dabbling to feed himself. His high school had a vocational program that partnered with local restaurants and then he applied for and was hired for an apprenticeship at the Balsams Grand Resort in New Hampshire.

When he made the decision to leave Sage, Harmon said, he told his wife Heidi that he wanted to find something other than restaurant work that still had him involved with food, but not management.

He applied for a few jobs in July and considered looking at butcher shops. But then he saw a sign seeking associates at the deli and talked to deli associate Cody LaPlante and Garvin.

“So far, it’s been a great opportunity. It’s a better quality of life. The restaurant business is a grinder and most of the time I’ve been married my average work week has been 60-80 hours,” he said.

On any given day, the deli at Mehuron’s is a hive of activity with some people making stock, others slicing for customers, some preparing the prepared salads and others making soups. Very little standing around goes on behind the deli counter.

“It’s been pretty phenomenal to see it from the retail side versus the restaurant side. It’s super busy and there are days when we’ve done 160-180 sandwiches,” Harmon said.

He’s enthused about the work Mehuron’s is doing creating a from-scratch kitchen, making stocks from the bones of the whole hogs from the Gaylord Farm and working to reduce food waste by working closely with other departments to turn food that is nearing its sell-by date into things like eggplant parmigiana, to name one example.

It’s satisfying, he said, when he and his co-workers put out the food they’ve prepared and it disappears in an hour.

“We’re very well-received and people are finding our menu online and calling in orders, which is also due to social media,” he said.

“I don’t miss restaurants at all,” he added.