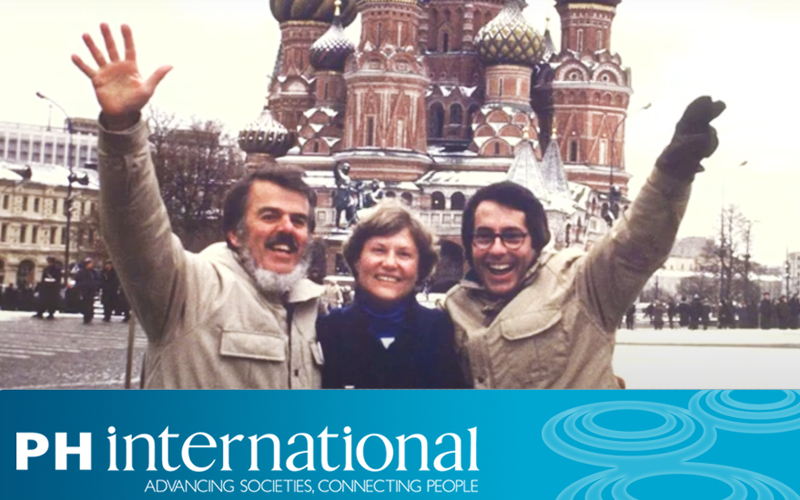 In November of 1985, about 25 students from Harwood Union High School took a flight to what was then the USSR. These students were part of the school's advanced choir and were off to sing for the Soviets.

“We wanted to bring the citizens of the U.S. and what was then the USSR closer together through citizen diplomacy,” explained Kathy Cadwell, a former teacher from Harwood. This was the start of Project Harmony International, an organization that fosters relationships between countries and individuals by providing exchange programs and more. “It was a time of heightened tension, and we really felt that we wanted to bring people together,” said Cadwell.

Cadwell, Charlie Hosford and David Kelley presented their idea to the school board in the spring of 1985. Cadwell was a teacher at Harwood, and Hosford was a parent to a student. “People thought we were crazy. This was an out-of-the box, insane idea,” said Cadwell.

Although they faced some resistance, the board approved their idea. “Maybe the concept of trying to reach out and get to know your ‘enemy’ was too frightening, or maybe they were just afraid of what might happen to us. Yes, some people thought we were being ‘brainwashed’ and that we would come back even more ‘brainwashed,” said Todd Kingsbury, who went on the trip as a senior in high school. Kingsbury now lives in Shelburne with his wife, Lisa, and two daughters. He’s been the director of Far Post Soccer Club since 2001.

As the group of teachers and students fundraised and did publicity, support for their cause grew. “As we did more and more community concerts, the outpouring of support from people all over the state made us realize that this was more than just a trip. We were tearing down barriers,” explained Kingsbury.

The trip lasted a little over two weeks. The choir toured around the country, putting on concerts for the people of the USSR. They went to Moscow, Leningrad (now Saint Petersburg), Minsk and Bello.

However, the group did not get to plan their itinerary themselves. “We got the invitation. All this was done at the highest levels of the State Department cultural exchange personnel, and their counterparts in the Soviet Union. All we knew was that we were going on a singing tour,” explained Cadwell. She went on to describe the “minders” that were assigned to the group, people who knew what they were doing and where they were going all the time.

Kingsbury recalled the reactions of the crowd after one concert. “The people watching approached our stage crying, giving us gifts, reaching out to meet us. We were an okay singing group, but we weren’t rock stars. But people responded to us.” The students learned and sang Russian songs, traditional American folk songs, shape note songs and a few by Mick Jagger.

When the group wasn’t traveling between towns, rehearsing or performing, they went to the “most beautiful and important sights,” said Cadwell. They went to the Kremlin, St. Basils Cathedral, the Hermitage Museum and Catherine Palace. They also went to schools.” I remember touring the schools and seeing how orderly they were,” recalled Charlotte Strasser, who was 16 at the time.

“I remember one night after dinner in a hotel, myself and another choir member were in the restroom when some Soviet women tried to engage us in conversation.  They didn’t speak English. Our Russian was very limited. So, there was a lot of pantomime. Basically, they were surprised to see how similar we were. We ended up embracing and laughing and embracing and laughing. It really made me wonder what they had been told about Americans,” Strasser said, who is now director of operations for the Radio Vermont Group.