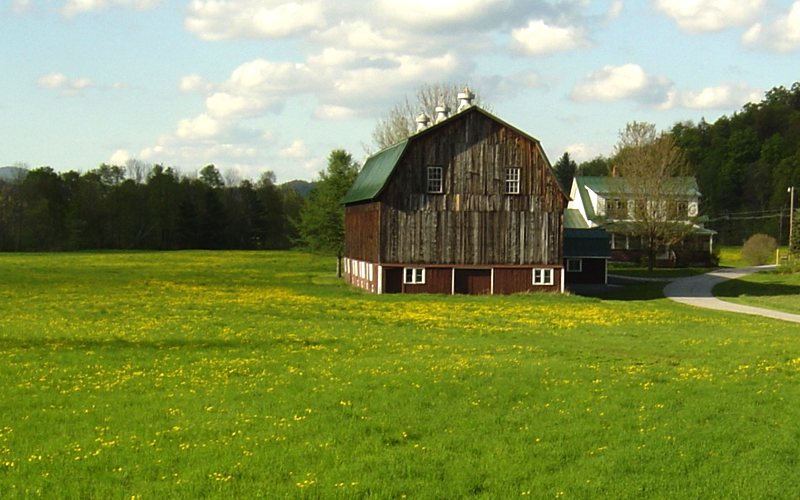 The Vermont Land Trust bought the 20-acre Kingsbury Farm in 2006 with the help of $100,000 from the Warren Conservation Fund. The farm was sold to the Vermont Foodbank which named Aaron Locker to farm it with the proviso that he provides the food bank with 30,000 pounds of produce a year. Locker subsequently bought the property from the food bank and continued to farm there – until he sold the property to Joe Bossen of Vermont Bean Crafters and All Souls Tortilla on April 9.

The Warren farm will now be known as Cloud Water Farm.

Shoppers in the know may have noticed glass jars of organic culinary herbs in an end cap at Mehuron’s with the label Mad River Botanicals. Those are the oregano, basil, thyme, sage and parsley that Locker and Howell are growing and drying.

They’re also continuing to sell value-added hemp products such as CBD gumdrops and oils at Mehuron’s, the East Warren Community Market, The Zen Barn in Waterbury as well as 11th Hour Botanicals in Middlebury and a retail market in Atlanta. They sell about 50% of their products online and the other half wholesale.

“In the fall, what we’re trying to do is have a wellness company that focuses on pain and stress and cold and flu. We’re harvesting echinacea and elderberry. Come this cold and flu season we’ll have throat lozenges made with our harvest plus a high strength CBD, arnica, peppermint salve,” Locker said.

Despite having just purchased the Kingsbury Farm, now Cloud Water Farm, Bossen is no stranger to the property. He’s been making his Bean Crafters bean burgers on the property since 2015. He and a partner also incubated another business, All Souls Torilleria on site three years ago before moving it to Burlington. Bossen started Bean Crafters in 2009 and in 2011 moved it to the Mad River Food Hub in Waitsfield where it stayed until it moved to Warren.

Now that he owns the property, he’s making plans for the future. He’ll be growing his own beans and other vegetables that he uses in his bean burgers. He will expand use of the barn to inventory and dry beans and hopes to do post bean harvest processing in the barn along with bean drying.

“Down the road I’m interested in growing more perennial food crops, apple trees that will line the section of the Mad Path that runs through the property, maybe with lost apple varieties that are being brought back,” he said.

“And then we’re also going to be planting hazelnuts, a very important crop of the future with a great nutrient value of its own,” Bossen said.

Pressed as to whether a locally-made version of Nutella might be in the making, he said yes. The Skinny Pancake, which goes through a lot of Nutella, has expressed an interest in a locally-sourced and environmentally-produced hazelnut spread.

“And then I’m interested to explore making nut cheese. I’ve got to give myself a long time to hone in on that,” he added.

Liza Walker, the Vermont Land Trust’s local spokesperson, said Bossen is a good fit for the Kingsbury Farm having been leasing the kitchen and participating in on-farm events since 2014.

“This seems like a very positive transition for this important local farm. The community's significant investment in the conservation of the farmland over 12 years ago has helped it transition seamlessly from one great farmer to the next, ensuring the land can be affordable to a first-time farm owner such as Joe, who is contributing to agriculture and food systems at the local and state level. We are lucky to have Joe farming here in the Mad River Valley!” Walker said.