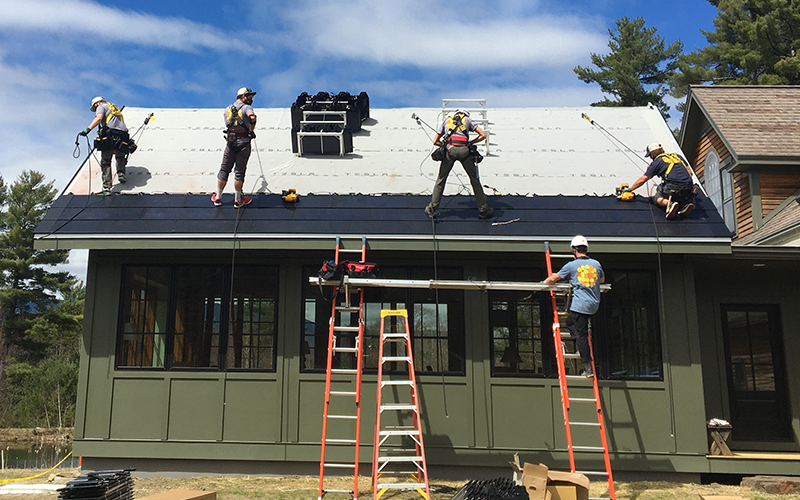 The first Tesla solar shingles to be installed in Vermont were installed in Warren at the Reicher home in mid-April, an event that was so noteworthy that the New York Times sent a photographer and interviewed homeowner Dan Reicher for an April 29 feature.

Reicher said that he purchased his solar shingles through SunCommon, Waterbury, which has become the dealer and installer of the Tesla shingles for Vermont and the Hudson Valley in New York.

“Tesla sent one of their chief technicians from California to work with SunCommon on the installation,” Reicher said.

Reicher said that in Vermont 20,000 roofs are installed each year, along with 2,000 solar arrays.

“The opportunity here is that instead of waiting for solar panels, this offers the chance for a two-fer, a roof and the ability to generate electricity in the same product,” Reicher pointed out.

He said he’s been interested in solar shingles since the 1990s when the idea began to take hold that it might be possible to make roofing shingles capable of generating electricity. He’s been carrying around a prototype from the 1990s ever since!

The solar shingles are going on an addition to his Galloping Wind Trail home in Warren.

“What distinguishes this from other attempts is that if you saw the roof, it looks very uniform, both the side that gets a lot of sun and the one that doesn’t. The sun-side shingles are active and the shade-side are passive,” he explained.

“This solar roof alone won’t power our house. The house is 3,000 square feet. But we have an electrical heat pump and a plug-in vehicle. We’ve done a lot of efficiency improvements and we also own a piece of the community solar system in Waitsfield,” he added.

The new solar roof will function in combination with his family’s other work to reduce their carbon footprint.

Reicher said that there were significant federal tax credits and state incentives to install the roof and noted that the solar roof was cheaper than the other alternatives he considered such as a standing seam roof with solar panels. He said the cost was roughly comparable to asphalt shingles with solar panels.

The solar shingles have a warranty that extends 30 years for solar production. The shingles are made of high integrity glass. The solar shingle pieces snap together like flat Legos, creating a circuit to make the electrical connection.

“Like all solar products, their output will deteriorate over decades, so you’re buying it for shelter and electricity production,” Reicher said.