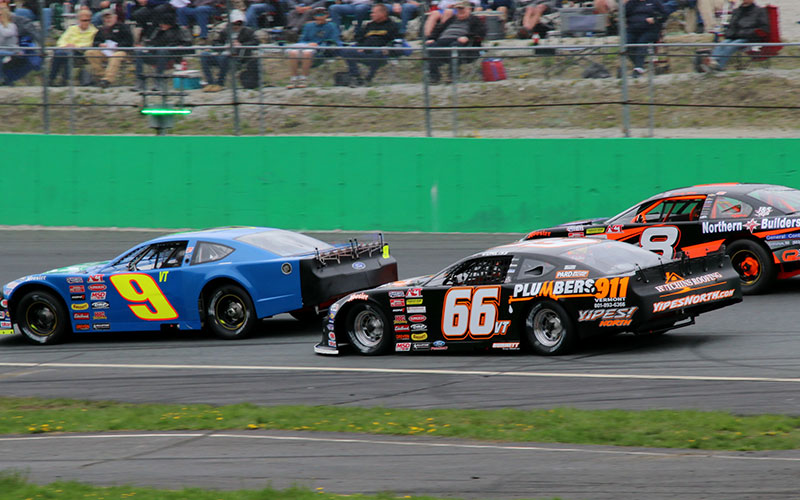 The complete card of racing originally scheduled for last Sunday is now on the Friday program. That means 125 green flag laps for the Maplewood/Irving Oil Late Models plus the Myers Container Service Triple Crown 100 for the Lenny’s Shoe & Apparel Flying Tigers. Add in the RK Mile Street Stocks and Burnett Scrap Metals Road Warriors for the formula to start the night racing season at Thunder Road.

Over 100 cars are expected. Household Vermont racing names such as Jason Corliss, Trampas Demers, Jason Woodard, Jaden Perry, Jeffery Martin and Nate “Tater” Brien are ready to finally hit the high banks after an extra five days. For the Maplewood/Irving Oil Late Models, the Mekkelsen RV Memorial Day Classic is the first of 14 rounds to decide this year’s “King of the Road.” More than a dozen drivers have also declared Thunder Road their home track for the inaugural New England Late Model Challenge Cup. That means much of the field is beginning two championship pursuits tonight.

The immediate goal, however, is earning a spot on the Memorial Day Classic granite monument. The list of Memorial Day winners includes Russ Ingerson, Larry Demar, Dave Dion, Jean-Paul Cabana, Kevin Lepage and Ralph Nason. At the end of tonight’s 125 laps, somebody’s name will go next to theirs for all eternity.

At Thunder Road, everyone still has their sights set on Barre’s Jason Corliss. The two-time defending “King of the Road” and reigning Memorial Day Classic winner had a rough opening day. However, with victories in all of Thunder Road’s “Big 5” events within the past three years, he remains atop the list of favorites until further notice.

Some of the best bets to try and topple him this Friday include former Memorial Day Classic winners Bobby Therrien, Trampas Demers, Tyler Cahoon, and Cody Blake. Scott Dragon is chasing his first Memorial Day victory after joining a new team. Established Thunder Road contenders such as Brooks Clark, Marcel J. Gravel, Kyle Pembroke, Matt White and Christopher Pelkey are all looking for their first entry on a monument. Three-time “King of the Road” Derrick O’Donnell is reportedly planning a limited schedule that includes the season’s biggest events.

For the Lenny’s Shoe & Apparel Flying Tigers, Friday is their longest event of the year. They’ll go 100 green-flag laps with a stacked field expected. The Myers Container Service regularly turns out riveting showdowns.

The RK Miles Street Stocks are going 25 laps in their second event of the year. Former champion Jeffrey Martin topped an impressive 31-car field on opening day. He won’t have an easy ride to a second title, though, as Kaiden “Tropical Storm” Fisher, Jamie Davis, Tommy “Thunder” Smith and Luke Peters are among those capable of putting together a title run.

Nine registered rookies are taking to the track this season, adding a wild card as they get up to speed. Respected veterans Gary “The Flying Farmer” Mullen and Will Hennequin have also returned after a hiatus, giving the division a great balance of youth and experience.

Feature action begins with the Burnett Scrap Metals Road Warriors, who are tough to top every week for sheer entertainment value. “Flyin’” Fred Fleury is already hunting his third trophy of the year after winning the Car Show and the feature on opening weekend. No matter who wins, there will be plenty of thrills per lap, from the magical Mystery Machine of Frank Putney to rising young stars like Bert Duffy and Andrea St. Amour.

All Thunder Road events are also broadcast live on FloRacing for those with a monthly or yearly subscription.