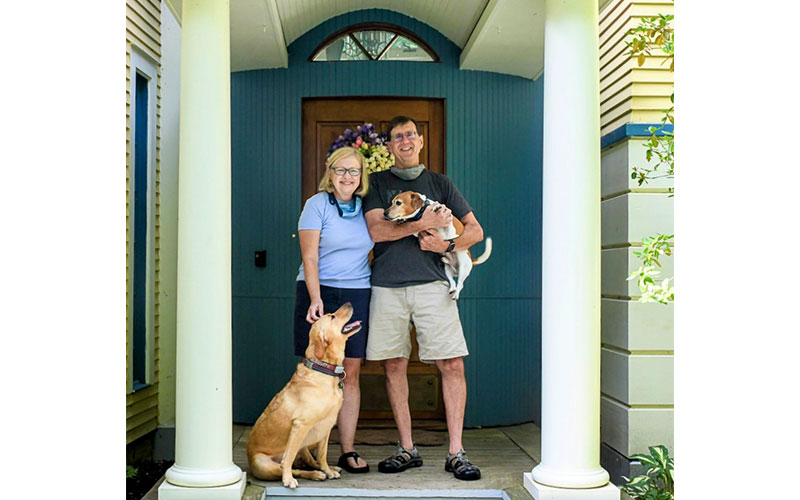 Outgoing president Karl Klein, who served for two years due to the COVID-19 officially passed the reins on June 30.

Colgan was active in the Bedford, Massachusetts, Rotary Club for six years – including one year as president – before he and his wife Susan came to The Valley. He joined the local Rotary in 2018. Shortly after joining he pitched the club on a Rise Against Hunger meal packaging event.

Colgan said that despite the fact that he was still fairly new in town, he was asked to take a leadership role going forward and said he was willing.

“I see the opportunity for this club to do something differently. The club is largely social but also about fundraising and grant writing. We raise funds and people come to us seeking donations,” he said.

“We’re trying to get a little more active and out in front of what we want to engage in,” he added, explaining that the club conducted a community survey seeking input on what issues The Valley faces and where people thought the Rotary could help.

Strategically we came up with three areas – young families, food insecurity and seniors,” he explained.

The Rotary club has made a strong commitment to Neck of the Woods child care center, Waitsfield, both financially but also in terms of eight volunteers who are doing hands-on work at the center trying to get the walls up and painted in advance of the infant and toddler program opening.

“That financial commitment as well as the volunteer work aligns with our strategic plan,” he said.

For food insecurity, the local club is actively collaborating with the Mad River Valley Interfaith Council in supporting the community food pantry and did a specific grant for Push the Proteins which helped provide animal-based protein for those in need.

“When the post-COVID environment supports it, we’ll do another meal packaging program,” Colgan said.

He said that the local club is still working on how it will work for seniors.

Colgan is also interested in leveraging some of Rotary’s influence in the region and internationally to support global projects. He pointed out that Rotary International started the worldwide effort to eradicate polio.

“The global impact of Rotary is phenomenal. We’ve focused, for great reasons, on The Valley and I’d like to expand our awareness of Rotary’s global impact and take steps towards getting involved in global projects,” he noted.

The way that works is that a local club in a wealthier country will partner with a club in a less affluent part of the world to do some fundraising. Those funds are matched by the district (there are 50 clubs in the Mad River Rotary’s district) and then those funds can be matched again by the Rotary International Foundation.

Typical projects for global fundraising include child and maternal health, water, sanitation and latrines, he explained.

Colgan grew up in Rochester, New York. and he and his wife raised their family in Bedford, Massachusetts. He worked as a medical device marketing guy until his wife retired as an elementary literacy specialist allowing them to head to Vermont. Once here, he began a life coaching practice which he is now phasing out and is selling home care franchises in eastern Massachusetts.