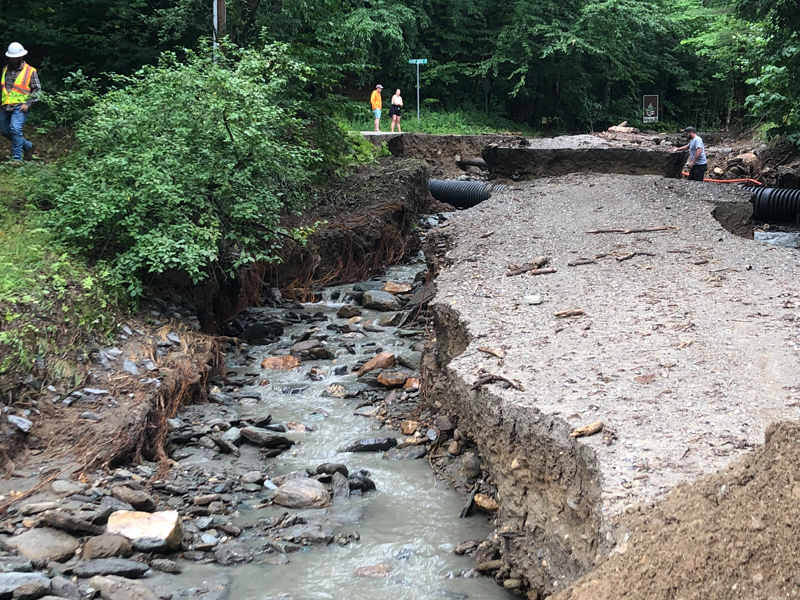 Butternut Hill Road in Waitsfield washed out on Tuesday night, July 20, after an intense lightning and thunderstorm lit up The Valley dropping dime-sized hail in places along with heavy wind and rain.

According to road resident Hugh Johnson, the worst of the damage occurred shortly after he made it home. He’d been to the store and contemplated driving around to look at the river but decided to come home instead, navigating the partially washed-out part of the road and across his partially washed-out driveway. The driveway subsequently washed away along with several feet of his yard that runs along the south side of the road.

Waitsfield Select Board member and emergency management officer Fred Messer was on site early Wednesday morning assessing the damage. Waitsfield road crew members were on scene shortly thereafter, dumping load after load of dirt and gravel into the partially washed-out sections, assisted by Kingsbury Construction, Waitsfield. Kingsbury Construction workers were pulling out damaged culverts and grading the materials the town was putting down.

“The goal is to get the road passable as soon as possible,” Messer said, noting that town road foreman Rodney Jones expected to get the road open – but not fully repaired – by midday or early afternoon.

Messer said that the town has the authority to use whatever contractors are available in a situation like this, where several dozen residents are cut off by an impassible or washed away road.

“To fix the road properly, we’ll have to put the job out to bid,” he said.

He said he expected the select board to issue an emergency declaration at some point on July 21.

Johnson said that the noise of the water running down the road along with the road materials was intensely loud. Standing in his front yard, he helped a man and a woman with an infant, up into his yard and directed them into his house. They were trying to get further up the hill to their home, but were unable to do so. Johnson told them the house was open and so was the fridge.

Road materials were washed into the woods on both sides of the road between Johnson’s house and the bridge over the Mad River. So much rain fell that at 9 a.m. water was still rushing down the north side of the road and into the Mad River via the woods.

The heavy rain not only destroyed the road, but heavy rain earlier in the week resulted in a new record at the USGS. stream gage on the Mad River north of Moretown. The stream gage measures the volume of water passing by it as well as precipitation and the height of the river relative to flood stage. The gage has record statistics going back 92 years.