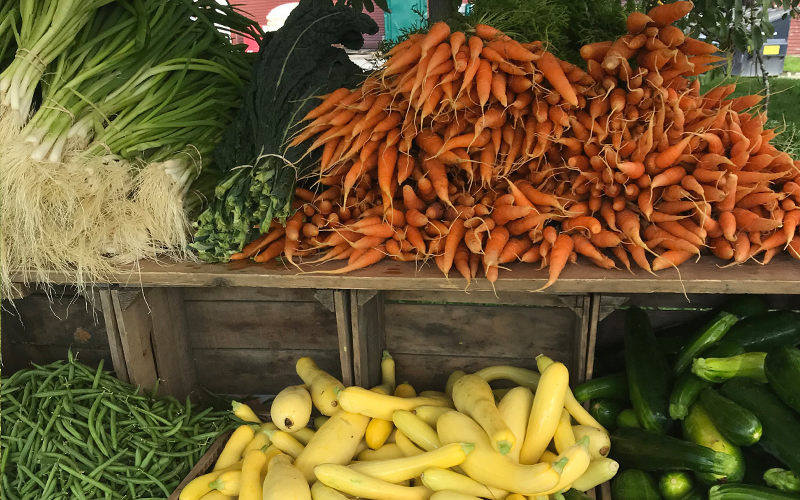 Growing season got off to a slow start with drought conditions in June, but the rains returned with a vengeance in July, with 6.69 inches of rain in Montpelier for the month, 2.5 inches more than the average July.

At the Waitsfield Farmers Market, several farmers were queried about this summer’s growing season including John Hirsch of Clearfield Farm in Granville. He called this growing season “one of the worst ones.” He said the drought “got us off to a really bad start,” bringing with it a lot of insects and pests. Then, excessive rains in July created problems such as fungal growth. “We’re thankful that we have anything. It’s been a tough one,” he said.

Jean Palthey of Tunbridge Hill Farm in Tunbridge said, on the other hand, the season has been good overall, despite the challenges. “Some things are doing well, some things aren’t doing so well,” he said. “It was pretty extreme drought and extreme wet” earlier in the summer. “We were all worried about wells going dry and the crops. Stuff that was in just sat there and didn’t grow, that messed up the whole balance, with insects and everything.”

Waitsfield farmer Dave Hartshorn of Hartshorn Farm said the season has been “good and bad. Having a lack of rain during strawberry season was great -- awesome crop, no diseases. [Rain] messes up things that like heat; dryness is protection against diseases, rain perpetuates diseases. A lot of fall crops got hurt” by the heavy rains in July. “Nutrients wash out of the soil when it rains.” He said some crops have produced yellowed or small fruit.

Local readers shared their gardens via Instagram, reporting that despite a rocky start, gardens and farms throughout The Valley now seem to be thriving.