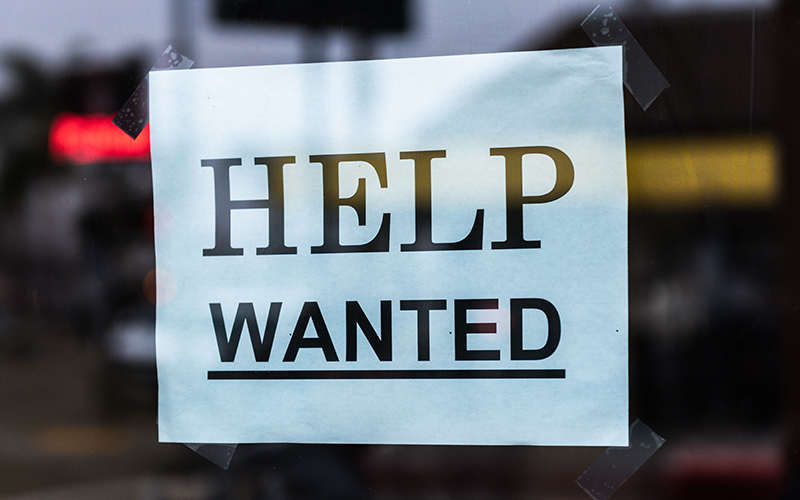 Restaurants and bars everywhere are facing challenges finding staff and many have had to limit hours of operations. Restaurants in The Valley are no exception, and many reported facing staffing issues as a result of the pandemic. Fit to Be Thai’d’s website says they’re looking to fill server positions and Worthy Burger Too has a “help wanted” sign in its window. Restaurants are feeling the pinch.

“Staffing has been a little challenging,” said Maggie Carr, owner of Three Mountain Café in Waitsfield. She said many of their reliable staff this summer have been high school students who are returning to school soon. With that impending shift and resurging COVID concerns, she said, “We’re going back to the drawing board, creative problem solving with staffing.”

Mad River Barn, Fayston, has been closed to diners throughout the pandemic and is shuttered until December. Their website said, “After facing the challenges that plague employment in the service industry, we have made the decision to shift our focus to private events for the remainder of the summer and fall of 2021.”

“The staffing situation is tragic. Wages have gone up in unsustainable ways. Even at these wages, we do not have enough staff. Hyde Away has always been seven days a week all its long history and now we have to close two days a week just to give staff a break,” said Ana Dan of the Hyde Away Inn, Fayston, and Sage restaurant, Waitsfield.

She added, “What is also really disheartening is that some guests just don’t understand how difficult it is to run an operation on thin staff. We’ve had our share of complaints and bad reviews – I think people don’t understand that the alternative is to have no service at all.”

At the Big Picture Theater and Café in Waitsfield, manager Kevin McMillion said staffing was difficult and said his daughter and the daughter of another employee had been helping out since the business reopened last month.

“We’re keeping it in the family right now.  We only have two cooks and traditional ways to find staff are not effective. We’re trying to ride this out and now that we’re getting back into sticky areas with rising COVID cases, we’re trying to keep everything small,” he said.

“If you’re an unemployed restaurant worker right now, why are you unemployed?” he asked.

At Canteen Creemee Company in Waitsfield, chef and owner Charlie Menard addressed the labor issue this summer by hiring three people through the federal J1 Visa program. He’s been working with those employees from Mongolia, Romania and two from Columbia.

“It’s been a really big help for me this summer and it was challenging because it was my job to find them housing. Housing is just so hard here,” Menard said.

And while it has been helpful this summer, the J1Visa program is only for three months, but Menard said the seasonal nature of his business is such that he is generally open less as summer wanes.

But he also said that it takes a leap of faith and a significant commitment to bring people to his business from the other side of the world.

Brian Lewis, who owns Toast and Eggs in Waitsfield and the Filling Station in Middlesex, said that staff shortages have required that Toast and Eggs is closed one day a week and its hours have been cut from 7 a.m. to 3 p.m. to 8 a.m. to 1 p.m.

He said what is particularly frustrating is that he is spending so much time each week trying to find employees, and they’re not showing up for interviews or responding to phone calls and texts and emails.

Mary Schenk at American Flatbread, Waitsfield, said that staffing issues have been awful this summer and what frustrates her the most is that after 50 years in hospitality business, she is unable to provide the quality of service that she is proud of providing. Lack of staff has also led to customers being turned away.

“I don’t know what is happening. We don’t have enough servers and those that we do have are limping along. If one person calls in sick, we’re screwed,” she said.

“I’m hoping it will change once the federal unemployment bonus expires. I’d like to have indoor, outdoor and picnic seating but with COVID numbers rising and falling and winter coming, we may have to go back to takeout,” she said.

Lawson’s Finest Liquids Taproom, Waitsfield, however, said the brewery is having no problems finding staff, citing the employment model, which offers “livable wages,” as an incentive. Lawson’s recently hired six new staff members and reported having a great summer so far, since returning to in-person dining after offering takeout during the pandemic.